The California Democrat slammed the billionaire's decision to reinstate Donald Trump on Twitter.

Rep. Adam Schiff (D-Calif.) said Sunday that billionaire Elon Musk made a “terrible mistake” restoring former President Donald Trump’s banned Twitter account.
“As we showed in the Jan. 6 hearings, the president used that platform to incite that attack on the Capitol. His comments about the vice president ― his own vice president ― put Mike Pence’s life in danger,” Schiff, who serves on the House committee investigating the riot, said on ABC’s “This Week.”

“He showed no remorse about that. He continues to lie about his actions on that day,” Schiff added. “He talks about pardoning the people who attacked police officers and attacked the Capitol that day.”
Schiff also noted that Musk was going against his own claim earlier this month when he said he would not allow any suspended Twitter users to return to the site until the company had established procedures on how to do so, including by forming a “content moderation council.”

“It contradicts what Elon Musk said that he was going to establish a counsel to evaluate this,” Schiff said. “And further contradicts Musk and his claimed concern about bots on his own platform to subject the decision to a poll on the platform that could be easily abused that way.”

Trump was banned from the social media platform two days after a mob of his supporters violently stormed the Capitol in an attempt to halt Congress’ certification of the 2020 election. Trump had used the platform to spread lies that the election was “stolen” from him and encourage his supporters to fight the results.
Musk, who finalized his $44 billion takeover of Twitter last month, has swiftly implemented an array of chaotic changes to the company in his short time at the helm, including firing a large chunk of the company’s 7,500 full-time employees and ordering remaining employees to agree to do “extremely hardcore” work to keep the company going ― a demand that triggered a wave of mass resignations.
Though he originally pledged to establish a process for reinstating banned users, he reinstated Trump’s account after holding a poll that asked Twitter users to click “yes” or “no” on whether it should be restored.
================================ The National Association for the Advancement of Colored People (NAACP) is calling for companies to “immediately pause all advertising” on Twitter in response to former President Donald Trump being reinstated.​

Musk polled users and had over 15,000,000 votes before deciding to reinstate Trump.
A 51.8 percent majority of users voted to reinstate the former president’s account.
“The people have spoken. Trump will be reinstated,” Musk tweeted. “Vox Populi, Vox Dei,” which translates to “the voice of the people is the voice of God.”
Trump’s account was active shortly after his tweet.

NAACP president Derrick Johnson had a total meltdown over the news — accusing Musk of “failing our democracy.”
“You are failing our democracy. Your garbage poll means nothing,” Johnson tweeted. “Did people outside the US vote? Did you reach out to marginalized communities—the targets of Trump’s rhetoric—for their input? Your followers don’t represent America. If you run Twitter like this, God help us all.”

App store ‘gatekeepers’ Apple, Google Play and Amazon could all decide to deplatform Twitter itself following new owner Elon Musk’s commitment to free speech, according to a report. 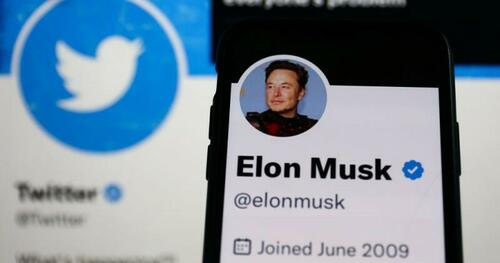 Speculation over app stores potentially targeting Twitter intensified after Apple executive Phil Schiller deactivated his Twitter account for no apparent reason days after Donald Trump was restored to the platform.
Twitter users also noticed that the official Apple account itself had apparently removed all of its tweets, although it was later revealed that this was nothing new.
According to a report by Fast Company, “Musk is playing a dangerous game that could spell game over for the platform he just bought” by his supposed failure to moderate impose stringent moderation.
“Musk’s platforming of hateful content could get Twitter itself deplatformed,” writes Clint Rainey, adding that the company could be on a “collision course” with app store “gatekeepers.”
Rainey and his ilk are mad that Musk has culled the number of “moderators employed to track harmful content and enforce Twitter’s rules against it.”
Showcasing again how journalists now weaponize their platforms to try to chill free speech, Fast Company contacted Apple, Google and Amazon to ask them if they planned to deplatform the Twitter app itself, but none responded.
The article notes how both Parler and Truth Social were at one stage banned from app stores before they were forced to agree to more draconian moderation policies.
While it’s incredibly unlikely that the Twitter app itself would ever be deplatformed, the ‘gatekeepers’ could follow the example of advertisers by putting pressure on Musk to impose tighter censorship, therefore derailing the billionaire’s stated goal to “free the bird” and restore true freedom of speech.
Given that Apple is also likely to take a large cut of Twitter’s new $8 subscription service, a financial motive is also in place to maintain a good relationship with Musk.
Much of the hysteria seems to be based around Musk allowing accounts that had been unfairly banned or suspended on the platform, such as those operated by the Babylon Bee and Jordan Peterson, to return.
Trump himself returning to the platform, despite insisting he has no plans to actually use his account again, has also instilled terror into censorious leftists who fear they are losing power over the ability to shut down adversarial voices.
================================