SAN DIEGO (Border Report) — The California Welcoming Task Force, made up of a number of migrant advocacy groups from both sides of the border, expressed disappointment with Title 42 remaining in place.
For more than two years, Title 42 has prevented people from seeking asylum at the border.
The order was set to expire Monday, but a preliminary injunction issued by a federal district court judge in Louisiana prevented Title 42 from going away.

During a demonstration on Monday near the San Ysidro Port of Entry to state, CWTF and the others said Title 42 will “continue to cause pain and suffering to people seeking safety at our southern border.”
Title 42 won’t keep migrants out, will put their lives at risk, advocates say
“At a time when humanitarian needs are increasing due to escalating crisis around the world, thousands of vulnerable migrants continue to wrongfully be denied their right to seek asylum in the U.S. under the guise of ‘public health’ under the cruel Title 42 expulsion policy.” said Kate Clark, senior director of immigration services for Jewish Family Service of San Diego.
A news conference was held in opposition to Title 42 near the San Ysidro Port of Entry. (Salvador Rivera/Border Report)
Others were also critical of the policy remaining in place.
“Keeping Title 42 in place is wrong. It’s un-American. It is not who we are or who we should aspire to be. We are committed to continuing the fight to end it,” said Norma Chávez-Peterson, executive director of the ACLU of San Diego & Imperial County.
Those who work with migrants expressed how difficult it’s been to break the news to asylum-seekers now living in shelters in Mexican border cities such as Tijuana. 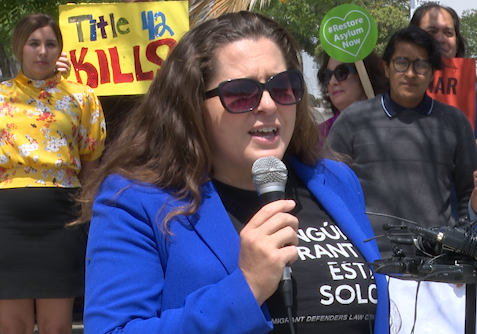 Lindsay Toczylowski is with the Immigrant Defender Law Center. (Salvador Rivera/Border Report)
“We had been telling them that May 23rd was the day when hope was on the horizon, but instead because of a single district court judge in Louisiana in a politically motivated case, Title 42 remains in force today,” said Lindsay Toczylowski of the Immigrant Defender Law Center. “So now we go back to the shelters and explain to them what their options are we will go back once again to telling people that there are no safe options for you, the door is being slammed in your face because right now because of title 42 asylum does not exist at our border.”
Other speakers went further calling Title 42, as it stands, “a racist policy designed to keep people of color from getting asylum.”
Visit BorderReport.com for the latest exclusive stories and breaking news about issues along the U.S.-Mexico border
“The government would have you believe it is not prepared for the asylum-seekers that are waiting, that the backlog is too great, they weren’t prepared for the Ukrainians to arrive after a war at our border and yet they did it because they are white,” said [mexican] Nicole Ramos, Project Director for Al Otro Lado. “We are allowing thousands of individuals, simply because of the color of their skin and nationalities to die along this border.”
Black Death and Abrupt Earth Changes 02-01-2018 updated version PDF
“The welfare of the people...has always been the alibi of tyrants, and provides...the servants of tyranny a good conscience.” ~Albert Camus
14.88 Mystery: $14.88 is everywhere!
You must log in or register to reply here.
Share:
Facebook Twitter Reddit Pinterest Tumblr WhatsApp Email Share Link
Top