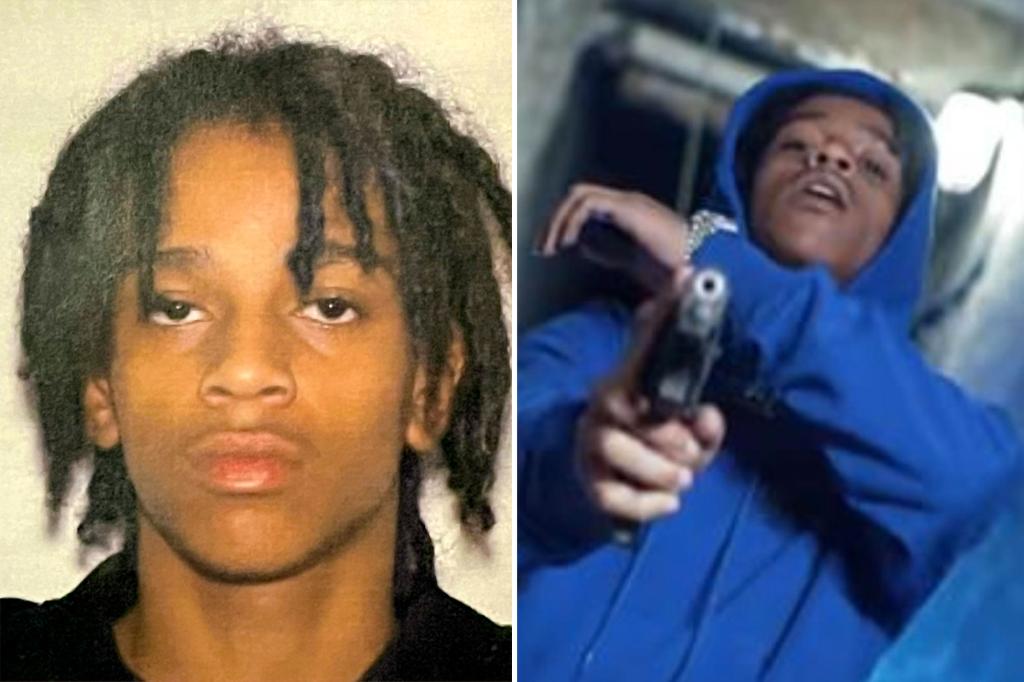 A 16-year-old reputed gangbanger who allegedly shot an NYPD cop in the Bronx is back in custody Thursday on a probation violation — just one week after posting bail.


A 16-year-old reputed gangbanger who allegedly shot an NYPD cop in the Bronx is back in custody Thursday on a probation violation — just one week after posting bail.
Camrin Williams, an up-and-coming rapper who goes by the stage name C Blu, was ordered back to the Crossroads Juvenile Center in Brooklyn because the gun he allegedly used to shoot the cop violated the terms of his probation from an earlier case, sources said.
Williams was on probation in a 2020 gun case when he allegedly got into a scuffle with police officers in Belmont on Jan. 18 and shot the 27-year-old cop.
The teen was hit with assault and weapons charges in that case, with Bronx prosecutors asking that the troubled teen be held without bail pending his next court date.
But Acting Bronx Supreme Court Justice Denis Boyle set his bond at $250,000, which Williams posted on Jan. 27 — reportedly with an advance he received after signing a recording contract with Interscope Records. 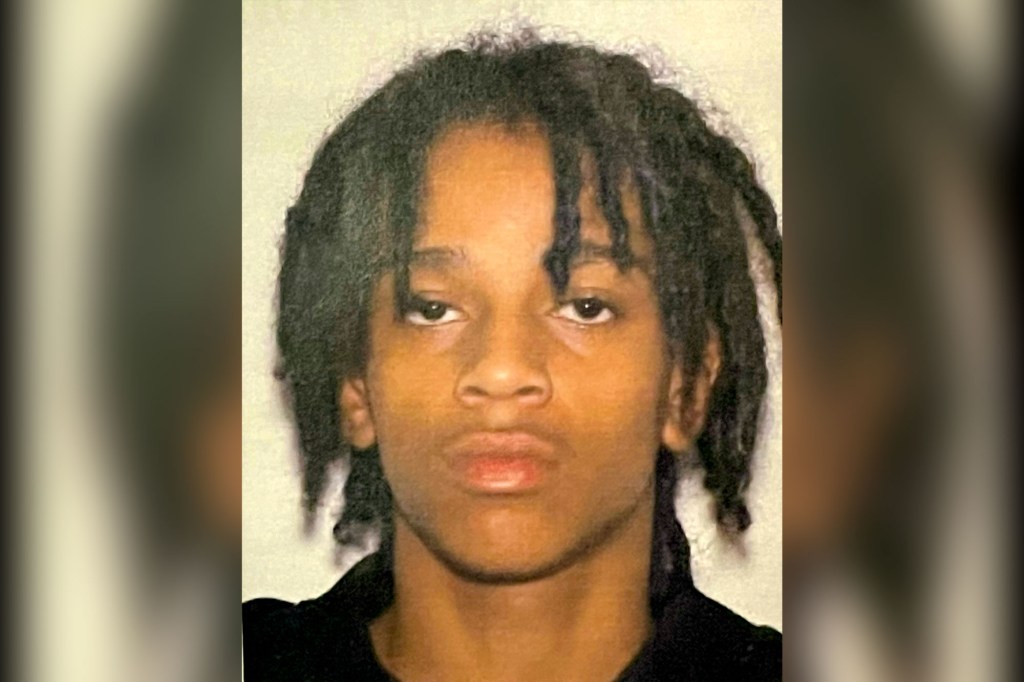 Camrin Williams is accused of shooting an NYPD officer.
However, the teen was picked up again Thursday and hauled into a Family Court hearing, during which he was ordered back to the juvenile facility, sources said.
It is unclear why he wasn’t hit with the probation violation when he was in custody following his arrest in the police shooting. 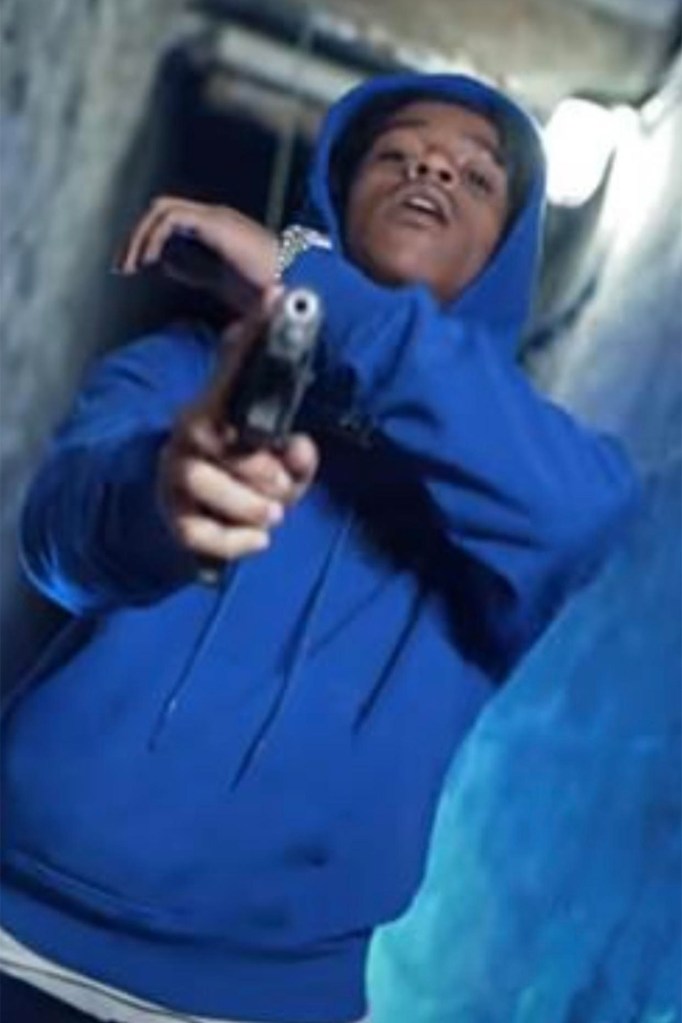 Williams was ordered back to the Crossroads Juvenile Center for violating the terms of his probation from a 2020 case.
“We’re glad that a cop-shooter is back off the street, but this revolving door for a repeat gun offender makes no sense whatsoever,” PBA President Patrick J. Lynch said.
“It should be clear to every New Yorker that our justice system is broken in many places. Our lawmakers need to prioritize fixing it above everything else.”
A spokesman for the city Law Department, which prosecutes Family Court cases, said the office does not comment on juvenile criminal cases.
Williams’ attorney, Dawn Florio, did not immediately respond to a request for comment. 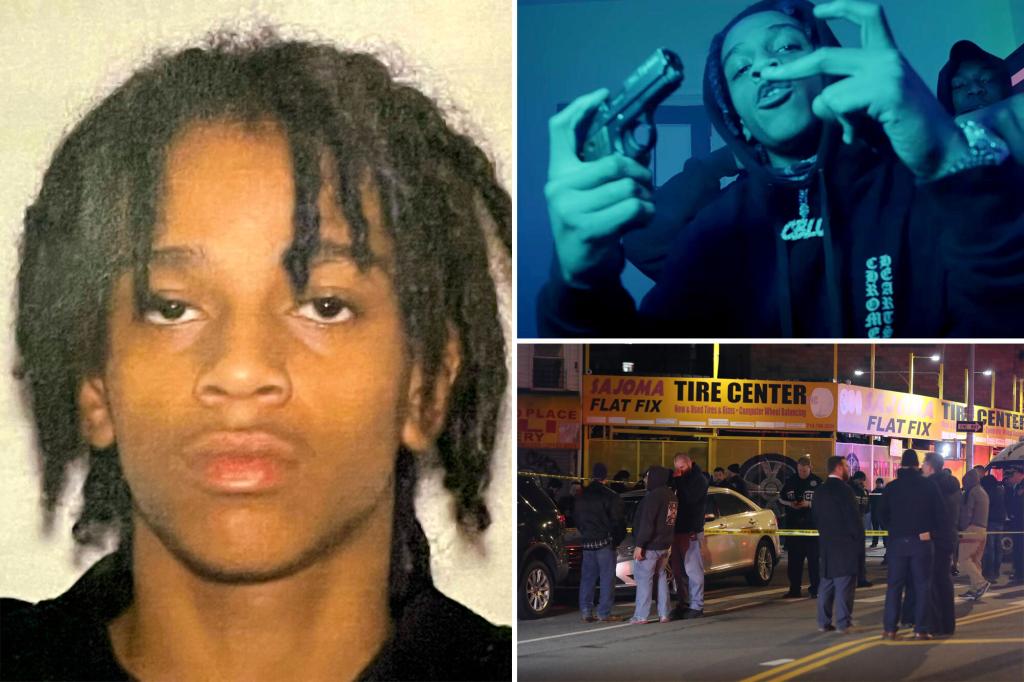 Charges have been dropped against the teenage rapper accused of shooting an NYPD officer during a scuffle in the Bronx earlier this year, officials confirmed. 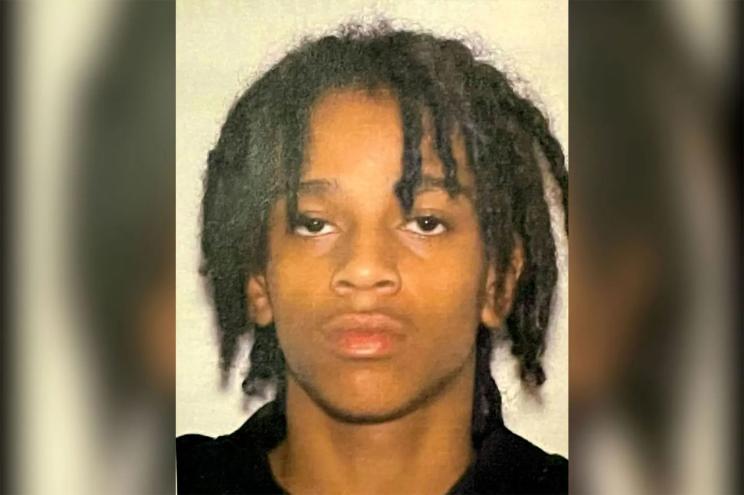 The attempted murder charges against 16-year-old Camrin Williams have been dropped.


Charges have been dropped against the teenage rapper accused of shooting an NYPD officer during a scuffle in the Bronx earlier this year, officials confirmed.
The gun and assault case against Camrin Williams, a 16-year-old reputed gangbanger and rapper who goes by the stage name C Blu, “cannot be prosecuted,” the city Law Department said in a Friday statement, without elaborating.
Williams had been facing the charges after allegedly shooting 27-year-old cop Kaseem Pennant in the leg in January while he was on probation for a prior gun case.
Bronx Supreme Court Justice Denis Boyle set the up-and-coming rapper’s bond at $250,000, in February, which Williams posted, reportedly with an advance he received after signing a recording contract with Interscope Records.
One week after he made bail, Williams was hauled back into juvenile court for violating his probation. 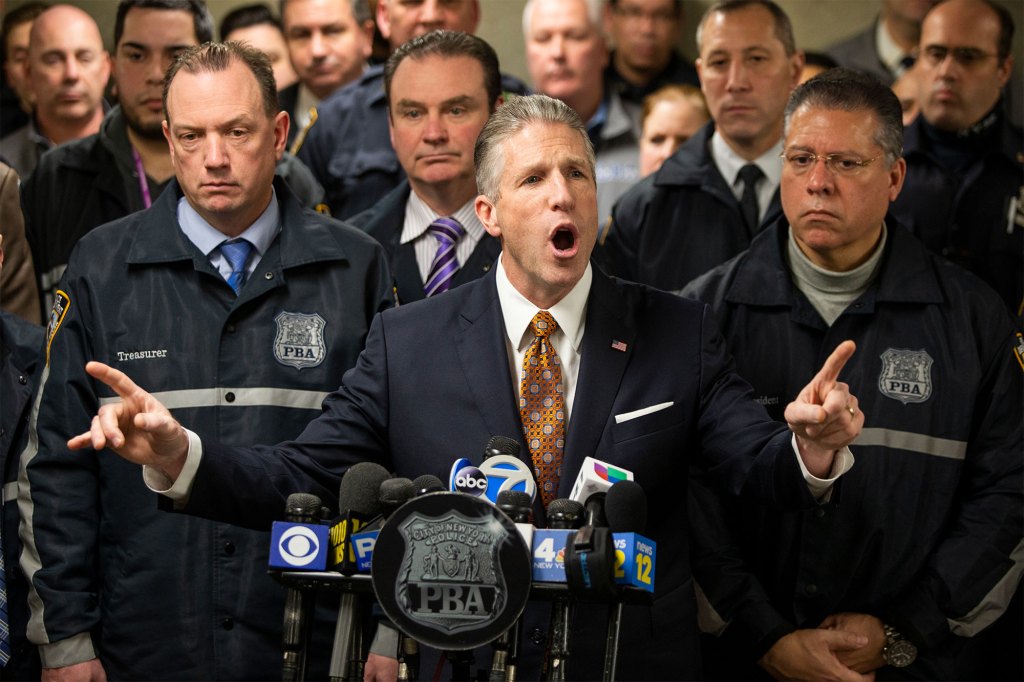 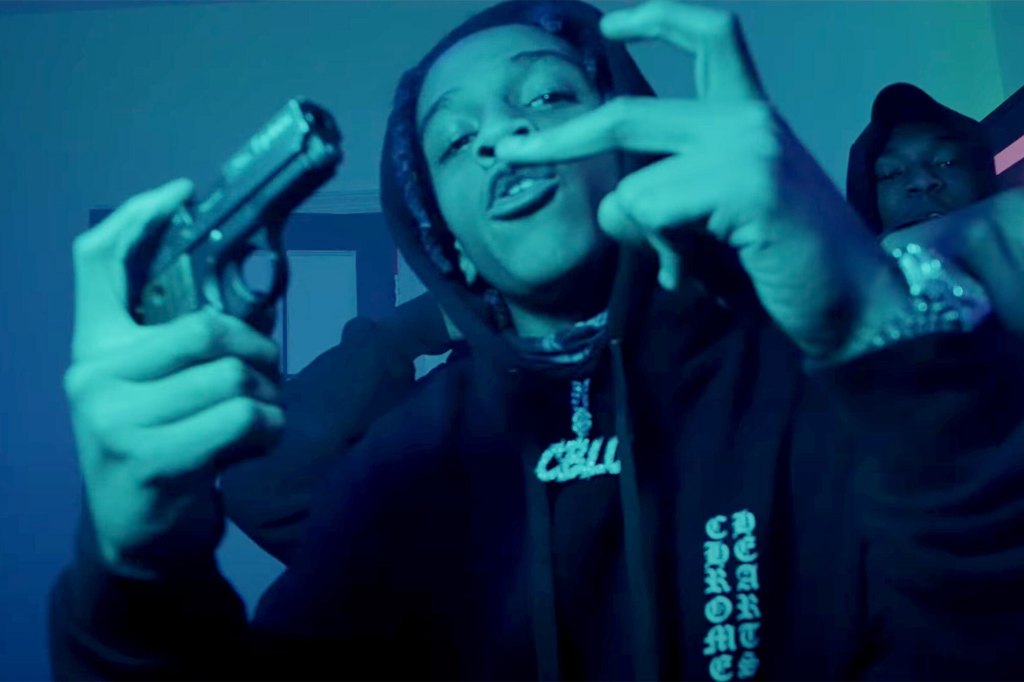 Williams is a rapper who goes by the stage name C Blu.C Blu/YouTube
But Williams’ fortunes changed this week when his latest case was dropped.
“Just because the city cannot prosecute doesn’t mean this individual should have been carrying an illegal weapon — a weapon which contributed to both him and an officer being shot,” the Law Department said in a statement.
“Pursuant to Family Court Law, the case is now sealed and we are unable to say more about the matter.” 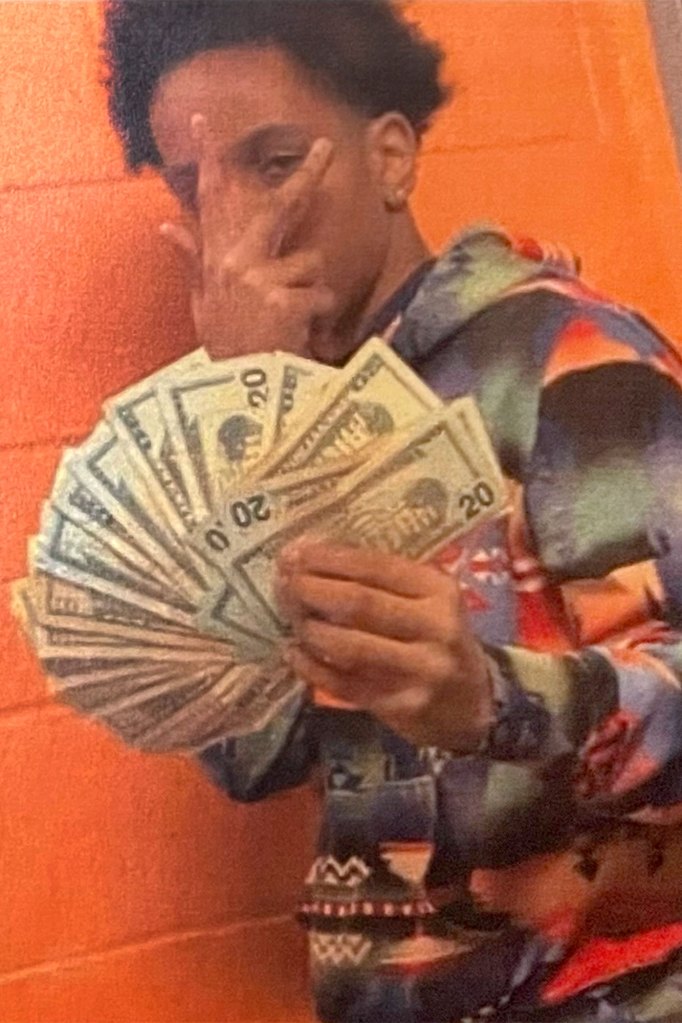 Williams is also a member of the Reywey Crew. 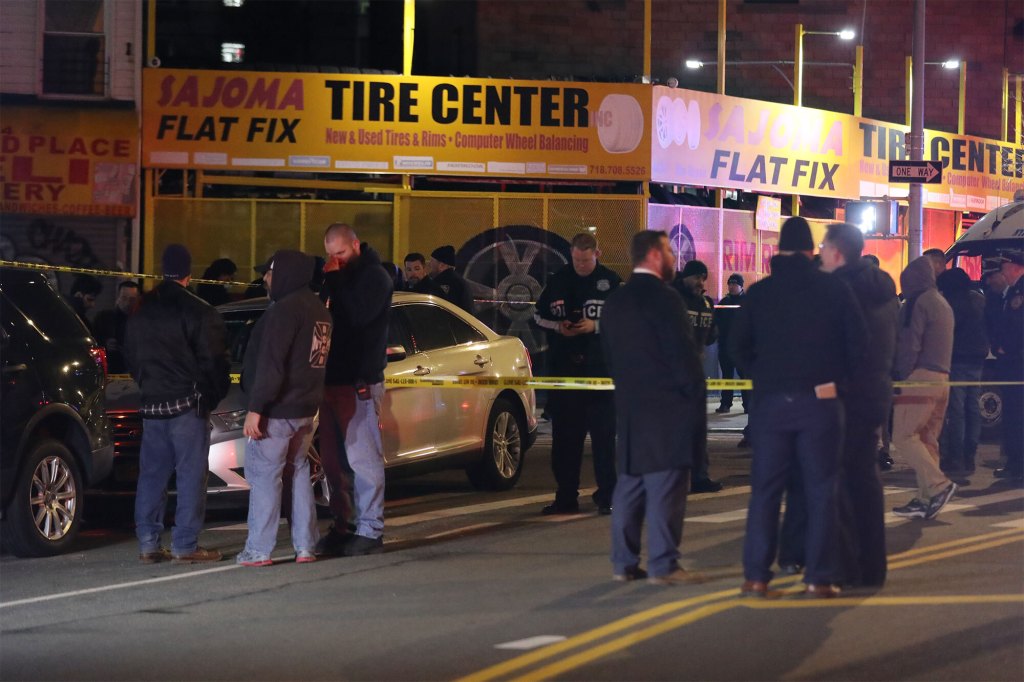 Police at the scene of the Bronx shooting earlier this year.William C. Lopez/NYPOST
NYPD Police Benevolent Association President Patrick J. Lynch called the decision to drop the charges against Williams “absurd.”
“This absurd decision should outrage every New Yorker who wants to get illegal guns off our streets. There is no dispute that this individual was caught carrying an illegal gun for the second time. If perps like this face absolutely no consequences, even after shooting a cop, we have to ask: why bother sending us out to get the guns at all?”
According to police, Williams’ gun went off while he was tussling with the officer after cops responded to a disorderly crowd on Lorillard Place on January 19.
Williams — a member of the Reywey Crew, a subset of the Crips – stepped toward a white car and put his hands in his pockets, cops said. When police asked him to show his hands, he refused, which led to the struggle.
He was previously arrested in the Bronx in May 2020, when he was just 14, for possession of a Tauris firearm, authorities said. 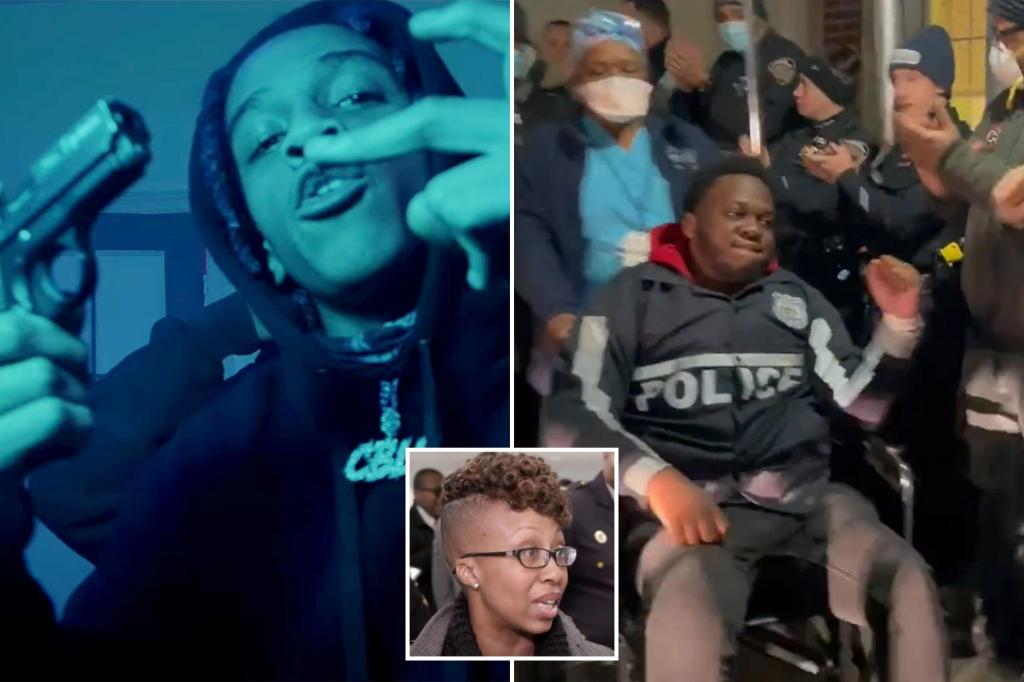 The case was dropped after Bronx Supreme Court Justice Naita Semaj disputed the NYPD’s version of events and discredited an officer’s testimony. 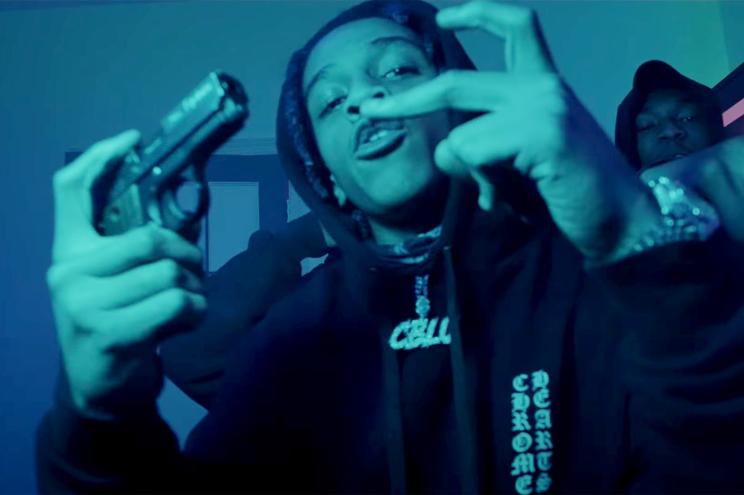 The Bronx judge who cut loose an accused cop-shooting teen gangbanger is “agenda driven” — and part of the reason crime is spiraling out of control, a furious law enforcement source told The Post on Saturday.
Camrin Williams, a 16-year-old drill rapper who goes by the stage name C Blu, was let off the hook in the gun and assault case, which the city Law Department said Friday “cannot be prosecuted.”
Williams’ gun went off when he tussled with an Officer Kaseem Pennant in January outside a building in Belmont. The cop was hit on the leg and the teen in the groin.
The case was dropped after Bronx Supreme Court Justice Naita Semaj — who has a history of cutting loose allegedly violent teens — earlier disputed the NYPD’s version of events and discredited an officer’s testimony about the arrest, which was captured on one of the cop’s body cameras.
“The fact that an agenda-driven judge invented her own set of facts and her own interpretation of what is clear on that video is another sign that the criminal justice system in the Bronx is broken,” the law enforcement source complained. 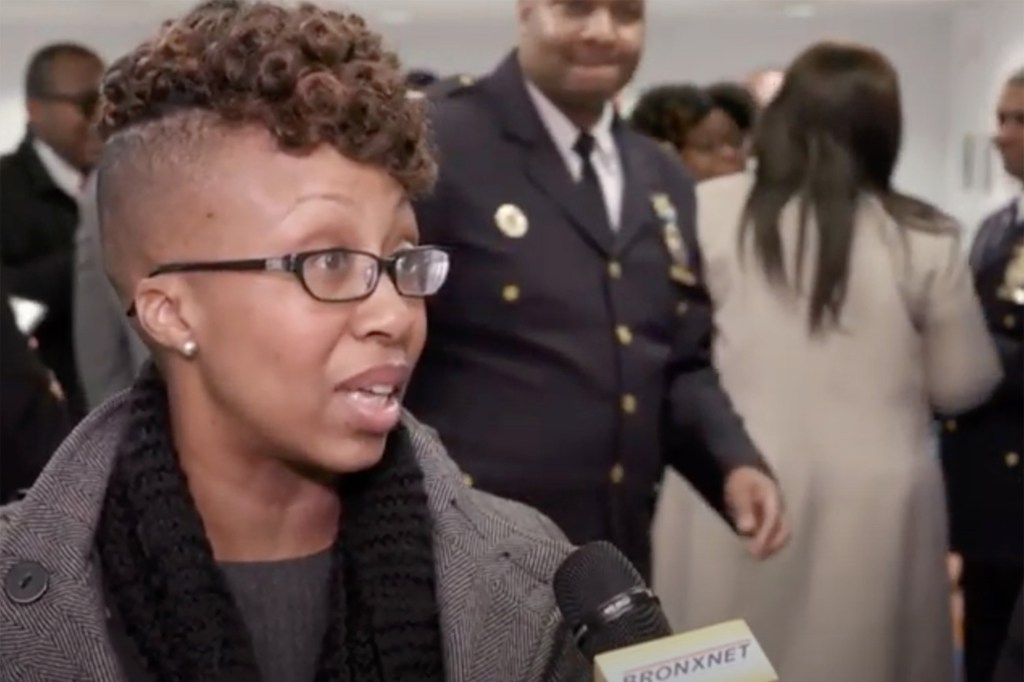 Bronx Judge Naita Semaj disputed the NYPD’s version of events. YouTube/BronxNet
The NYPD decried the decision to drop the case against William, noting the death of 11-year-old Kyhara Tay, who was allegedly gunned down by a 15-year-old shooter.
“The decision to dismiss the case is obviously concerning,” Deputy Commissioner John Miller told The Post. “In a borough where we were just reminded with the death of an 11-year-old that the most serious problem is kids shooting kids, dropping the charges against a gang kid arrested with his second gun in the shooting of a cop sends a bad message.”
The officer stopped Williams, a known gang member who had posted photos with guns on social media, and who was on probation for a weapons possession case from May 2020.
“When he approached the individual and asked him to stand still and take his hands out of his pockets, he takes his hands out of his pockets then puts them back in and keeps moving backwards. The judge’s interpretation of that video recording was that the suspect was complying. He was doing everything but complying,” the police source said. 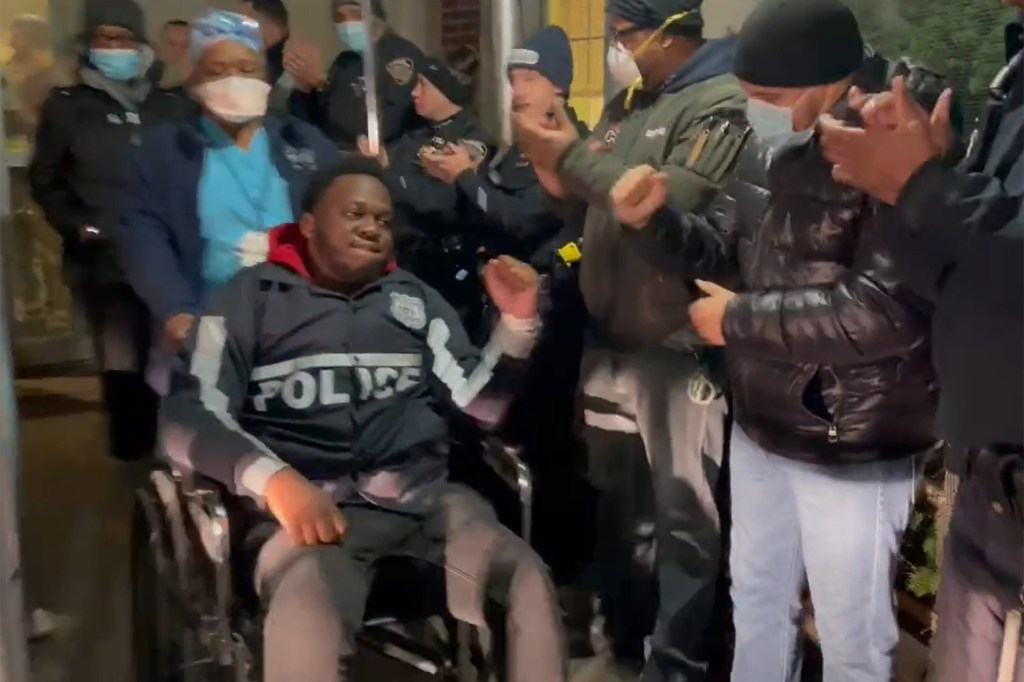 Officer Kaseem Pennant was shot in the leg January. @NYPD48Pct
He said Williams was trying to get away with a loaded gun.
Williams was arrested in the Bronx when he was just 14, for possession of a Tauris firearm, authorities said.
Semaj had contended the bodycam footage showed Williams was relatively calm and cooperative throughout the encounter.
Semaj, a former foster care agency caseworker who went on to law school, took the Supreme Court bench in January 2022 and has already stirred up controversy in several cases.
In February she allowed two alleged teen criminals to go free pending trial. 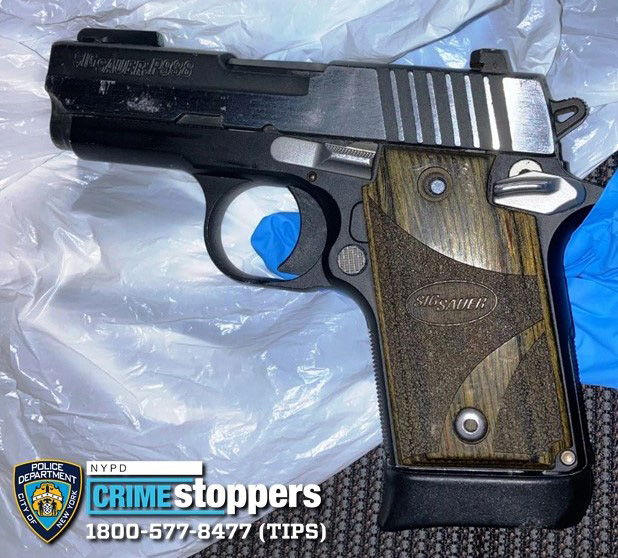 Police recovered the gun allegedly used by 16-year-old Camrin Williams in the shooting of the officer.DCPI
Semaj released Braulio Garcia, 17, who with another teen faces murder, manslaughter and other charges in connection with the New Year’s Day death of a good Samaritan, with supervision, and over the objections of prosecutors.


In another case, Semaj walked back another jurist’s decision to set bail for a 17-year-old accused of attempt murder. The judge released Sharif Mitchell, who had been held on $30,000 to $60,000 bail, on his own recognizance, again going against prosecutors.
In April, she dismissed a murder indictment against Steven Mendez, 17, who was accused of killing Saikou Koma, 21, last fall when he was on probation for another case.
She ruled that detectives gave “problematic” and “improper” testimony during grand jury proceedings, outraging the victim’s family.
“What is wrong with this judge?” Koma’s dad, Amar Bully Koma, said. “If this was the judge’s son, or his nephew or a relative, he would not let him go. The city, the mayor. If this was his kid, they would not let him go.
“They do not care about us.”
Mayor Eric Adams defended the officers after Semaj’s March ruling in William’s case. 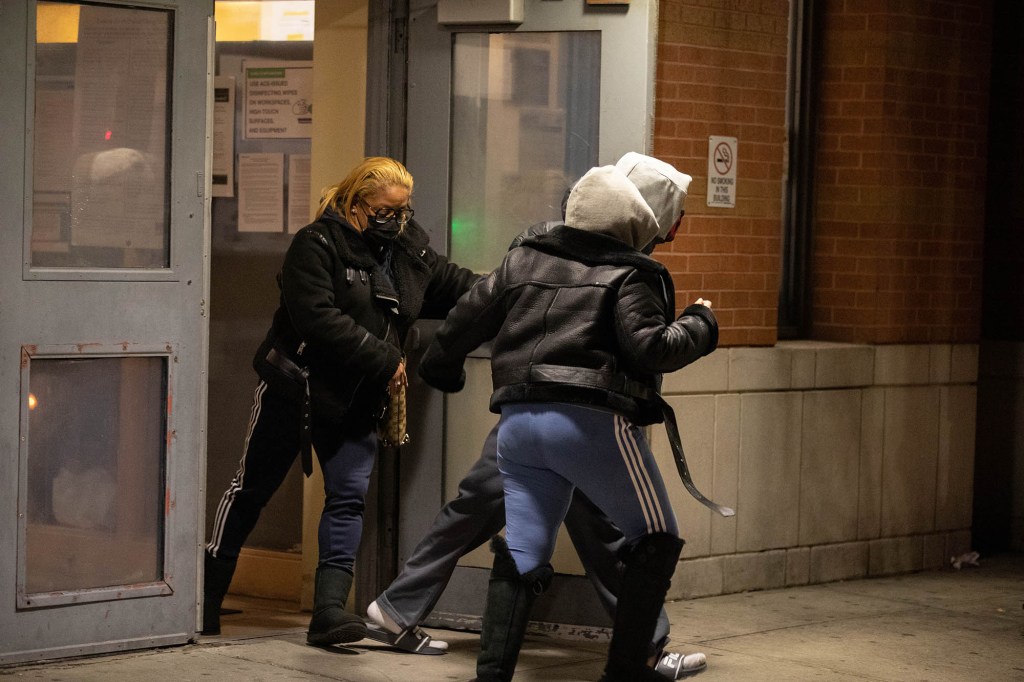 Family members surround Camrin Williams, aka C Blu, as he was released from Juvenile Center in Brooklyn on Jan. 27, 2022.Robert Mecea
“The decision to dismiss the case is obviously concerning. In a borough where we were just reminded with the death of an 11-year-old that the most serious problem is kids shooting kids, dropping the charges against a gang kid arrested with his second gun in the shooting of a cop sends a bad message,” John Miller, the NYPD’s deputy commissioner of intelligence and counterterrorism, said Saturday.
You must log in or register to reply here.
Share:
Facebook Twitter Reddit Pinterest Tumblr WhatsApp Email Share Link
Top