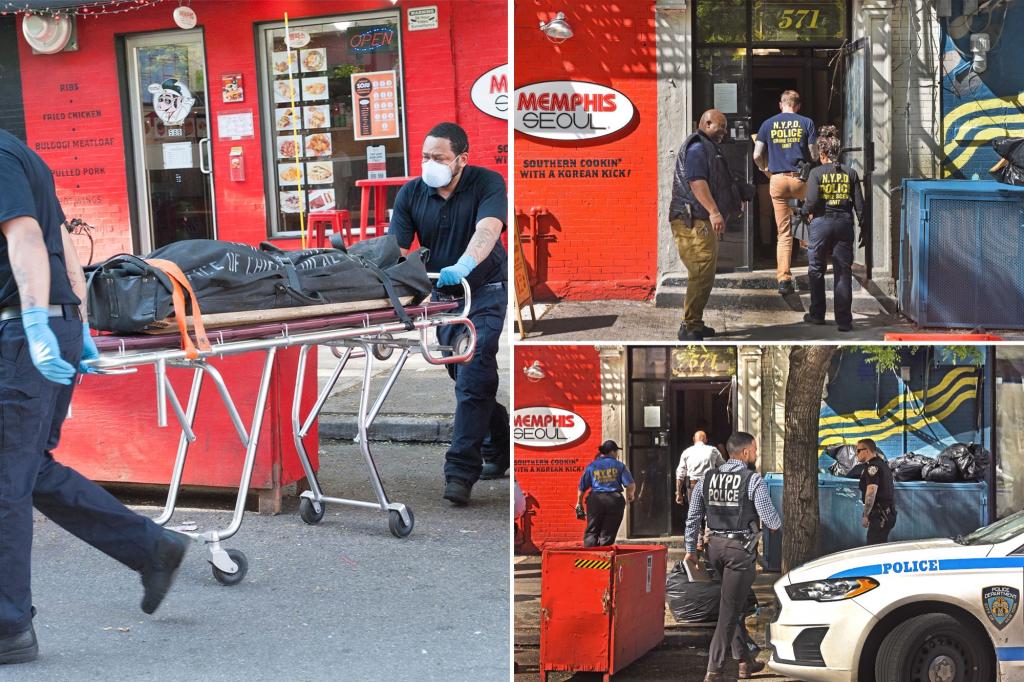 Shemene Cato, 48, is facing charges of murder, manslaughter, assault, endangering the welfare of a child and criminal possession of a weapon in the slaying of little Shalom Guifarro, cops said. 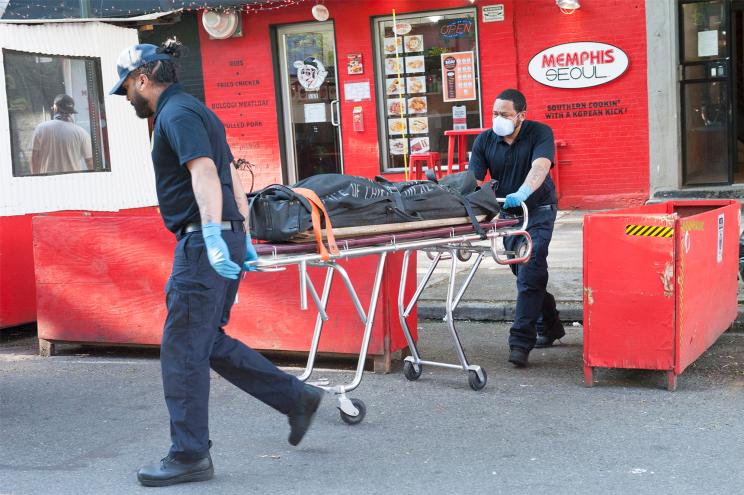 
The mom of a 9-year-old Brooklyn girl who was found beaten and abused in her family’s Brooklyn apartment was charged in the tot’s death Monday, cops said.
Shemene Cato, 48, is facing charges of murder, manslaughter, assault, endangering the welfare of a child and criminal possession of a weapon in the slaying of little Shalom Guifarro, cops said.
When cops responded to the Crown Heights apartment that sits above a restaurant at about 1 p.m., Sunday, Shalom was severely bruised and unresponsive, police sources said.
Neighbors told police about hearing “constant arguing” coming from the apartment, source said.
Officers responding to the apartment on Sunday said the dead girl’s sibling told them Shalom was “spanked” by her mom after a temper tantrum before she died.
Police also found some suspicious items in the home, including an extension cord in the hallway, a branch and “a curved piece of furniture,” sources said. 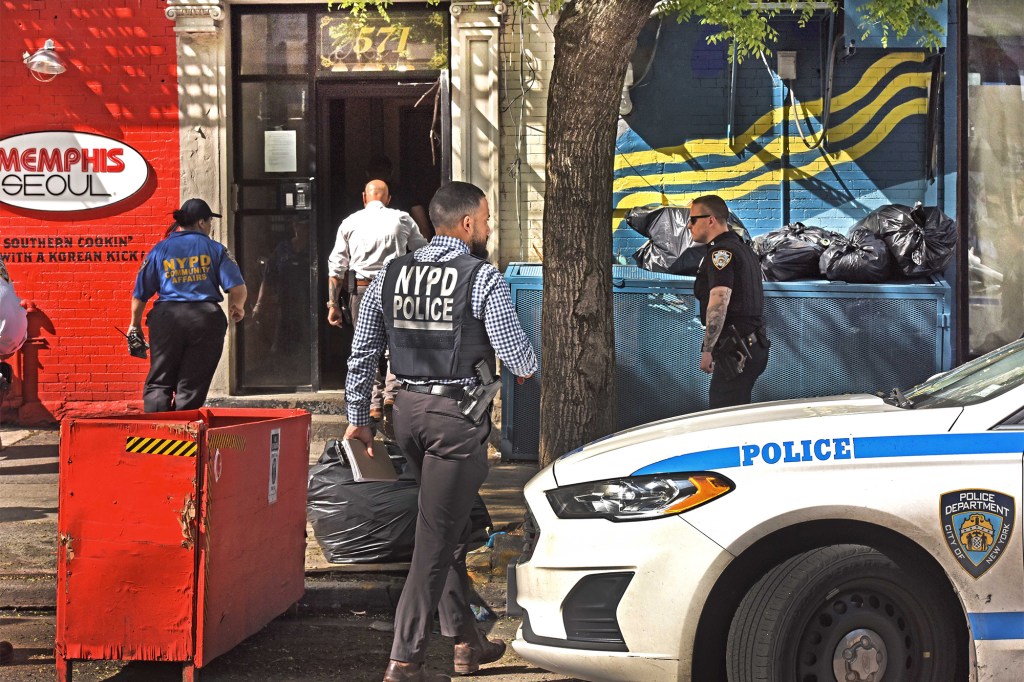 Officers arrive at the crime scene investigating the incident. Gregory P. Mango
Sources told The Post that cops had responded to the family’s home for 14 separate domestic violence reports before Shalom was found battered and unconscious Sunday, the sources told The Post.
Details of the prior police calls to the apartment are not immediately clear, but the sources said the dead girl’s 48-year-old mother was the alleged victim in most of the reports.
None of the calls involved child abuse and the Administration for Children’s Services had never been called to the apartment, officials said.
The city medical examiner ruled the girl’s death Monday a homicide as a result of multiple force trauma. 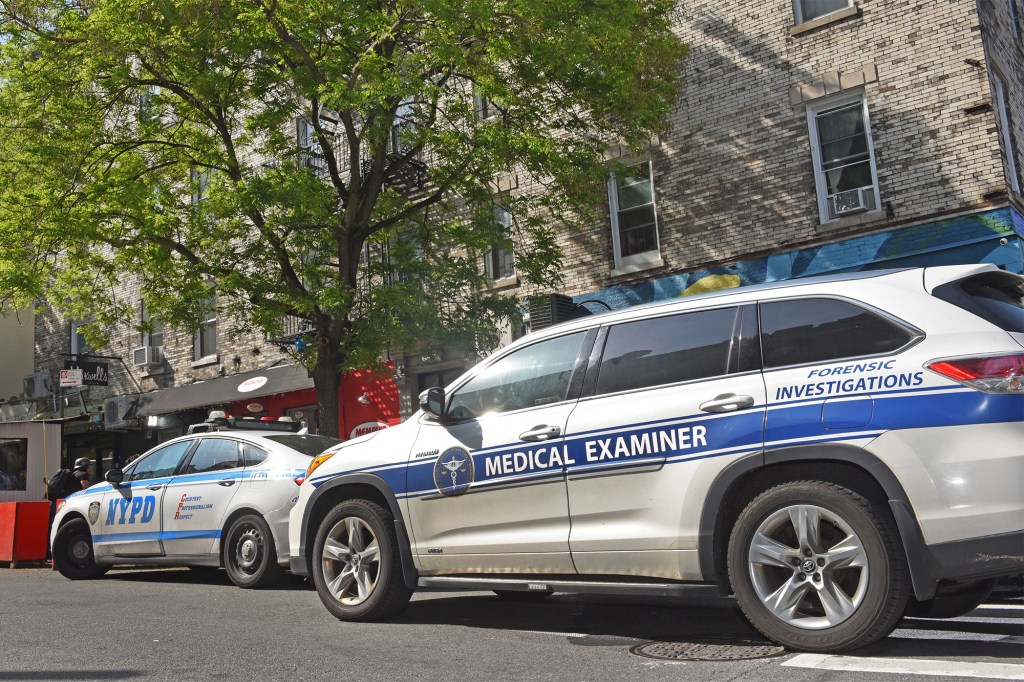 The mother is facing charges of murder, manslaughter, assault, endangering the welfare of a child and criminal possession of a weapon.Gregory P. Mango
Jessuan Sierra, the building’s super, said the family has lived there for three years.
“The two girls were nice kids,” he said.
Bart Hubbuch, the owner of Memphis Seoul, the restaurant below the apartment said he “frequently” saw Cato yell at the kids.
“The kids were quiet, well-mannered and well-dressed,” he told The Post.
“Their mother frequently cussed them out and wouldn’t let them play with the other kids on the block.
Cato works for the city Human Resources Administration and retained an attorney through her union, the sources said.
It is not immediately known who the attorney is. 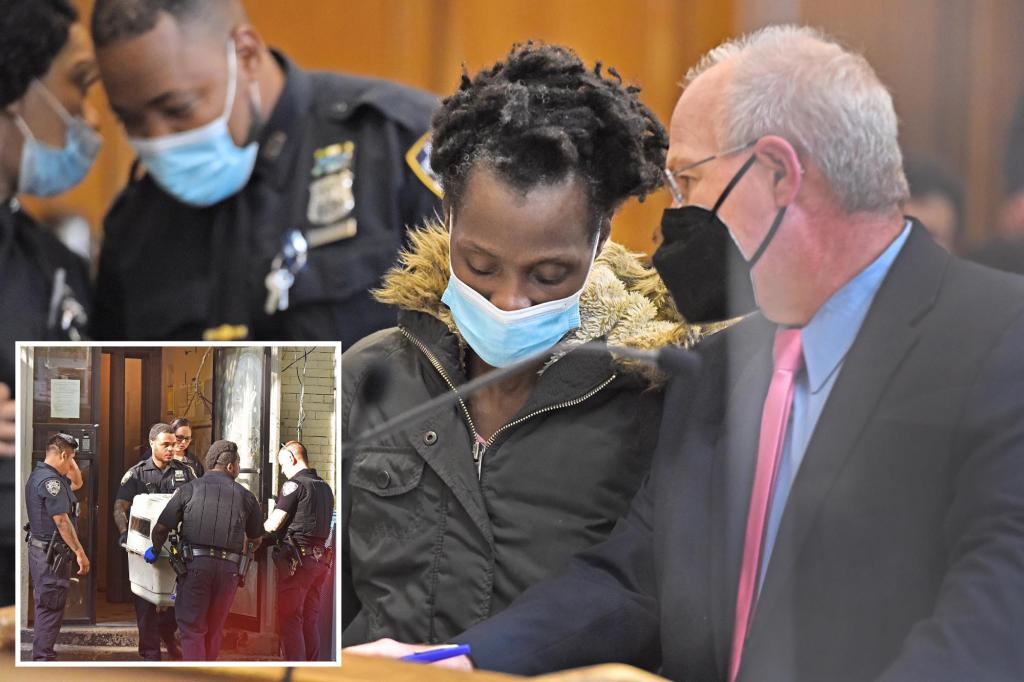 The mother of a 9-year-old Brooklyn girl tossed a bed on her daughter after beating her — then repeatedly ignored pleas of “mommy help me” before the young girl died, prosecutors …

200-year-old bar was home to 'Goodfellas' and Anthony Bourdain


The mother of a 9-year-old Brooklyn girl tossed a bed on her daughter after beating her — then repeatedly ignored pleas of “mommy help me” before the young girl died, prosecutors said Tuesday.
Shemene Cato, 48, brutally attacked little Shalom Guifarro and her 13-year-old sister for two hours before mortally injuring her daughter on Sunday, Brooklyn Assistant District Attorney David Ingle said at the mom’s arraignment.
The prosecutor said it wasn’t until the older girl snuck off and called 911 that cops showed up at the Crown Heights home and found Shalom.
“As detailed in the complaint, a doctor at the medical examiner’s office determined that Shalom suffered multiple blunt force impact injures about the head and body, resulting in internal bleeding which ultimately caused the death of Shalom,” Ingle said.
Cato was arraigned on a second-degree murder charge and ordered held without bail by Judge Simiyon Haniff, who also issued an order of protection for the older girl. 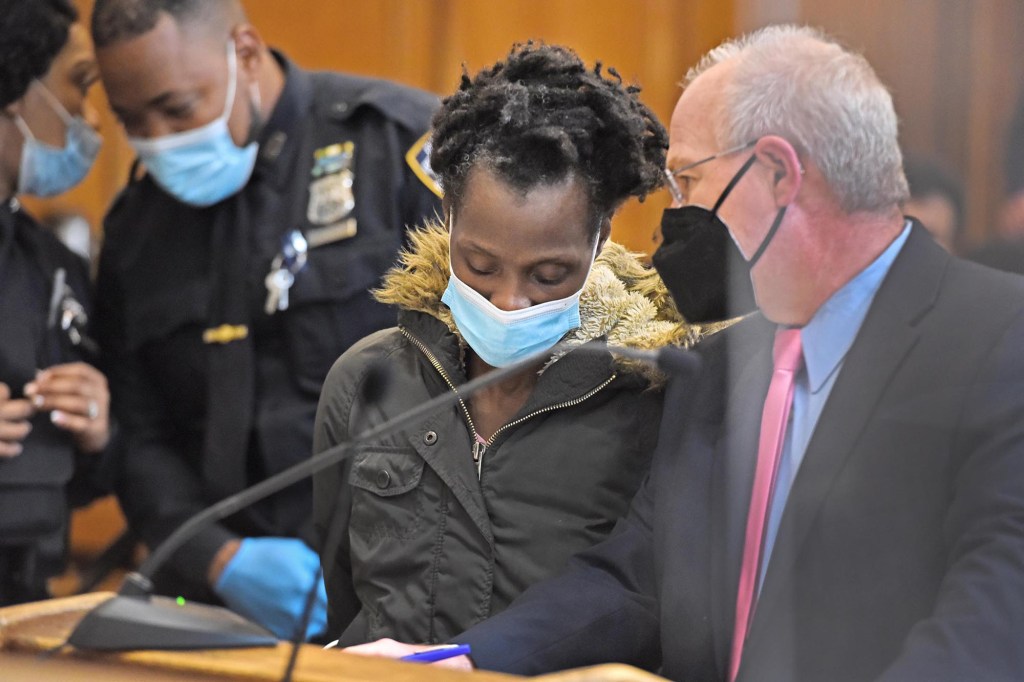 Prosecutors said that Shemene Cato ignored her daughter’s pleas for help after she savagely beat her and threw a bed on her. Gregory P. Mango
“Miss Cato, I noticed your head has been down but I want you to make sure you heard and understand,” Haniff told Cato, who burst into tears in court.
Police had responded to Cato’s home in Crown Heights around 1 p.m. on Sunday and found the girl badly bruised and lifeless inside the apartment.
According to the dead girl’s sister, Shalom was “spanked” by her mom and put in time out after a temper tantrum before she was found unresponsive, police said. 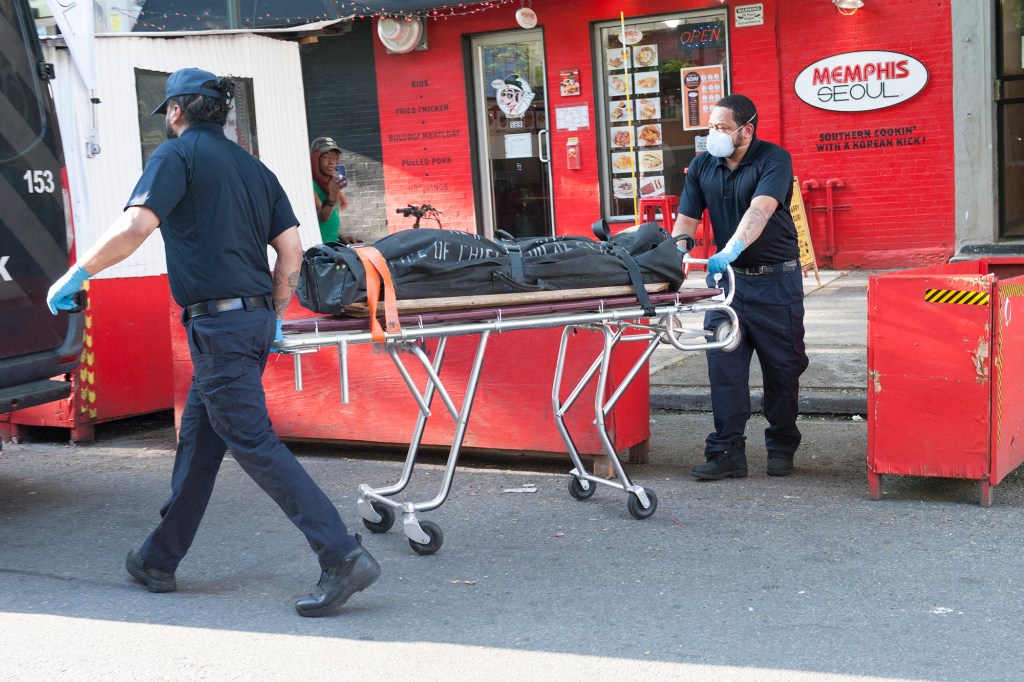 Prosecutors said Shemene Cato beat her two daughters over a missing computer tablet.Wayne Carrington
Prosecutors said in a complaint filed Tuesday that Cato allegedly beat her two daughters over a missing computer tablet, prompting Shalom to flee and hide under the bed.
Cato then lifted the bed and dropped it on her younger daughter’s head, then ignored the girl’s pleas for help as she bled internally, the complaint said.
Cops had visited the apartment 14 times before for domestic violence reports — most involving Cato complaining about alleged harassment by her ex, records show. 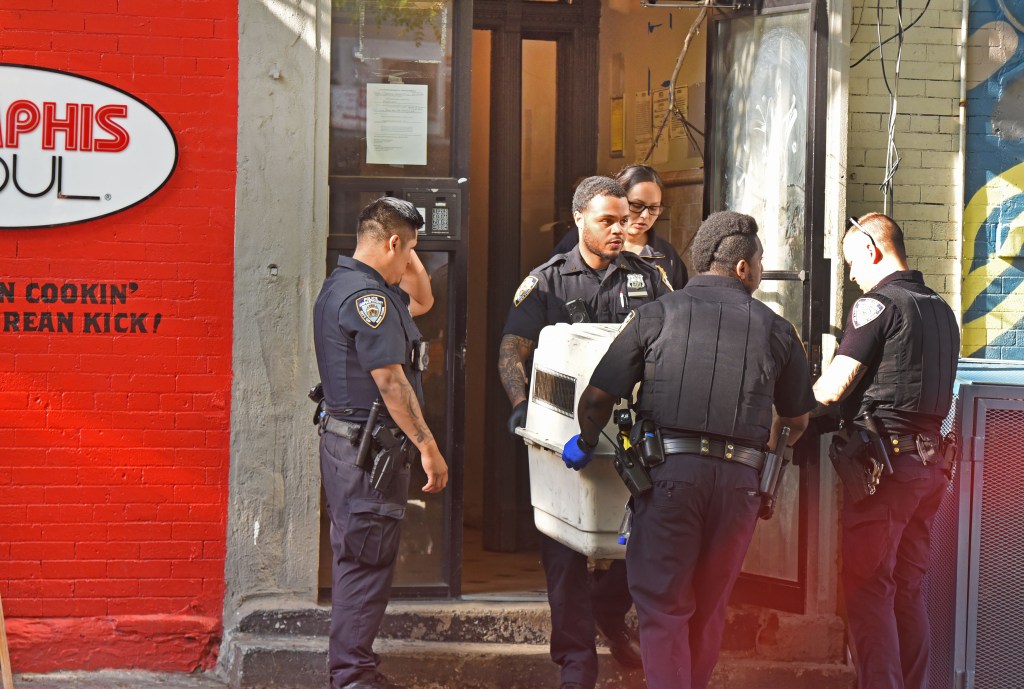 Police found the body of Shalom, Shemene Cato’s youngest daughter, after her oldest daughter managed to escape and call 911. Gregory P. Mango
Officials said city child services had not been involved with the family in the past.
Nonetheless, neighbors told The Post that the family could often be heard arguing.
“I heard a lot of screaming and fighting from the apartment,” neighbor Jason Rahimzadeh said Monday. “I heard loud arguments at least 10 times, where they were screaming at the top of their lungs. The family kept to themselves. 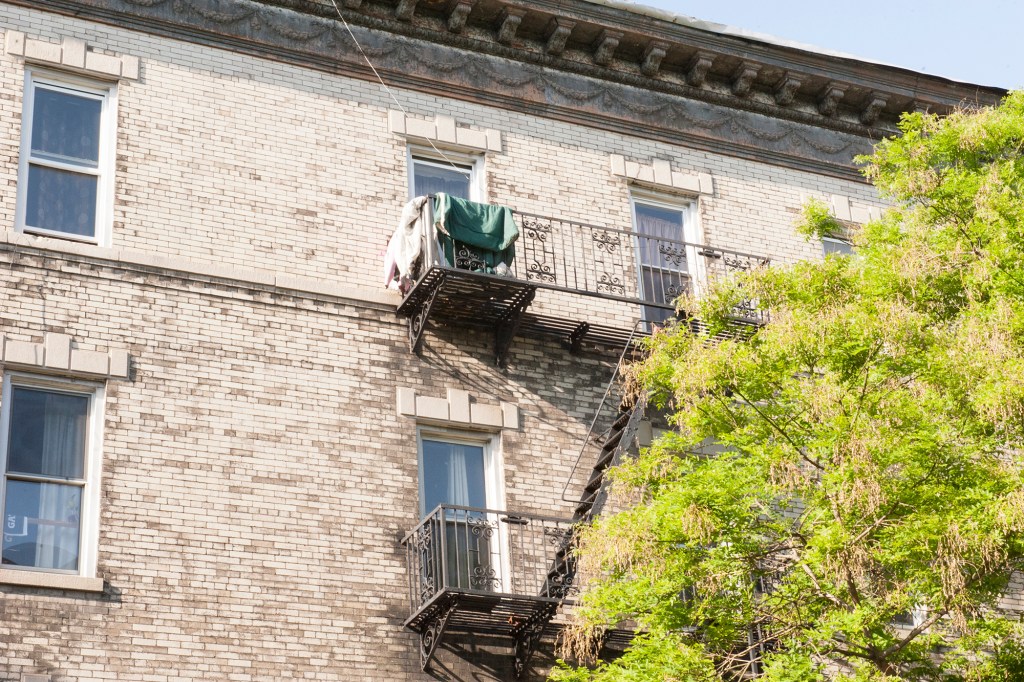 Neighbors told The Post that Shemene Cato constantly yelled at her kids. Wayne Carrington
“Everyone in the building is so nice and calm, but we all knew that apartment was trouble.”
Bart Hubbuch, who owns the bar near the apartment, said Cato consistently yells at the kids.
“Their mother frequently cussed them out and wouldn’t let them play with the other kids on the block,” said Hubbuch.
Cato works for the city Human Resources Administration, with her union picking up the tab for the lawyer’s legal fees, according to sources.
The lawyer, Edward Mandery of Brooklyn Defender Services, declined to comment as he left the courthouse Tuesday. 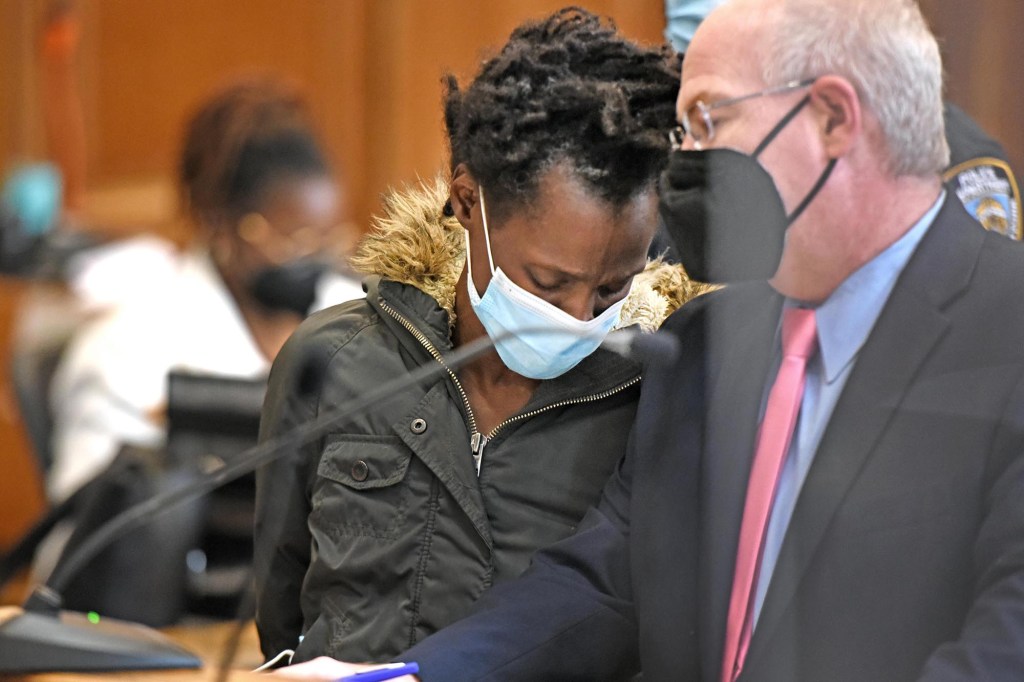