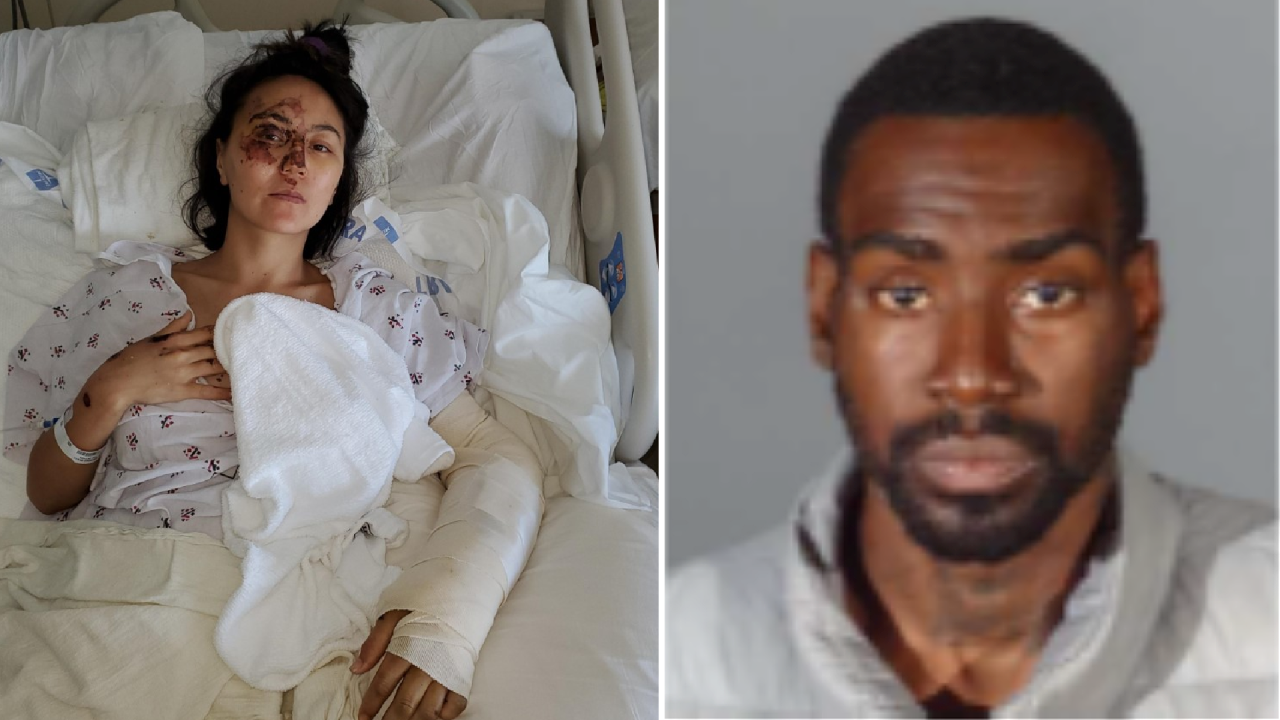 Police are searching for a man suspected of running over and injuring a pedestrian while fleeing downtown Los Angeles with a stolen vehicle earlier this year, officials said Tuesday. The hit-and-ru… 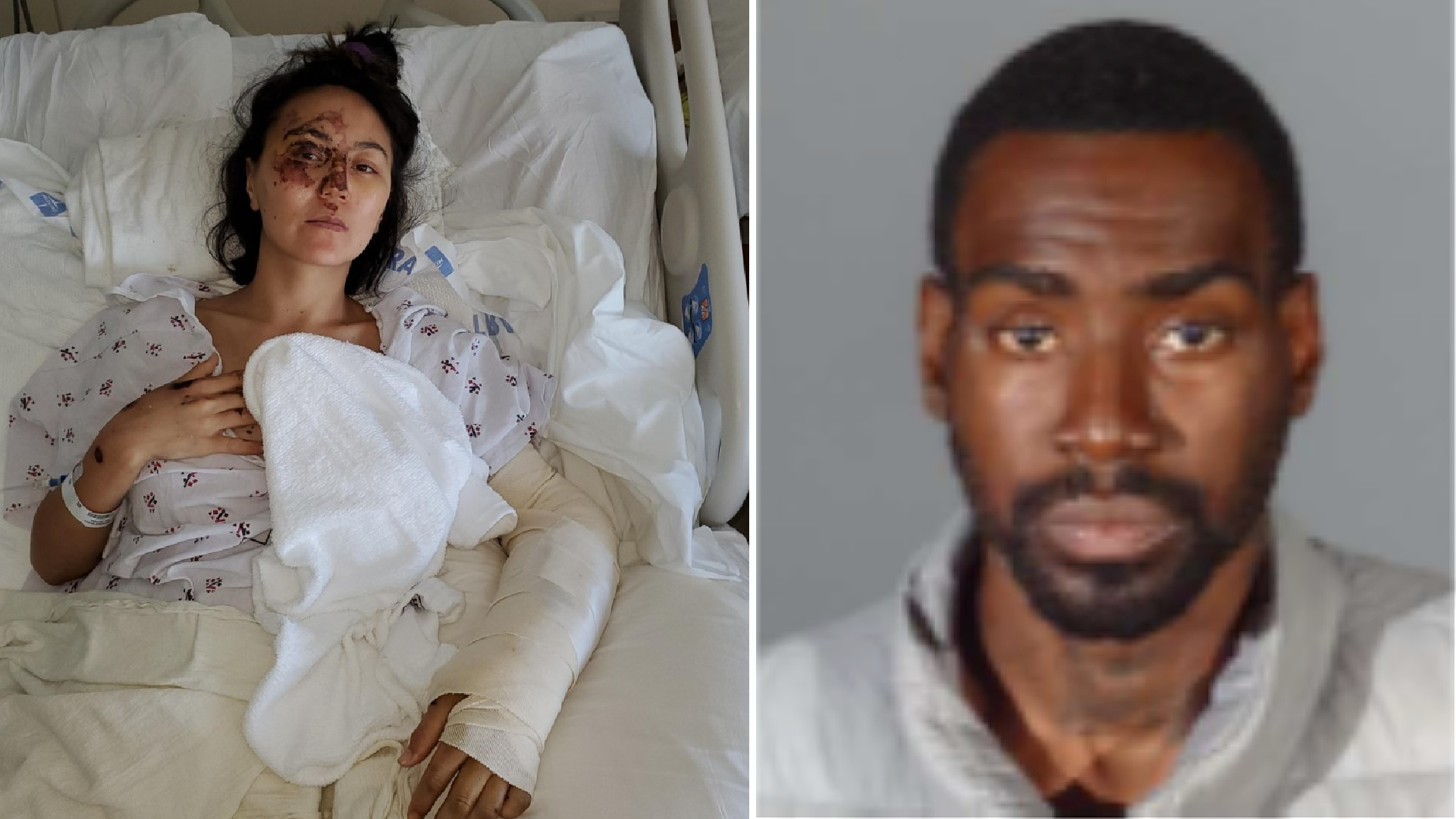 A pedestrian is seen in her hospital bed after being severely injured in a Feb. 20, 2021 downtown L.A. hit-and-run collision. On the right, the suspected driver involved in the collision, Tajon Wright Freeman, is seen in an undated photo released Sept. 21, 2021. (LAPD)


Police are searching for a man suspected of running over and injuring a pedestrian while fleeing downtown Los Angeles with a stolen vehicle earlier this year, officials said Tuesday.
The hit-and-run collision happened around 8:35 p.m. Feb. 20, after a man stole a 2001 Toyota Tundra from the area of Seventh and Figueroa streets and was driving away from the scene, according to the Los Angeles Police Department.
The pickup truck ran over the pedestrian, who was was crossing the street at the intersection.
The driver kept going, not stopping to render aid to the badly injured woman, LAPD officials said. He later ditched the truck a short distance away in the area of Bixel and Ingraham streets.
Paramedics responded to the scene of the collision and took the woman to a hospital, where she was admitted with severe injuries.
She has since been discharged from the hospital, but still faces a long road to recovery, police said. LAPD shared photos of the victim in her hospital bed, where she was lying with a broken arm and visible injuries to her face.

Using DNA evidence left in the truck, detectives identified the driver as 30-year-old Tajon Wright Freeman, according to LAPD.


But detectives have not been able to find Freeman.


LAPD put out a bulletin with photos of the suspect Tuesday, in hopes that members of the public will lead police to his whereabouts.


They warned that Freeman is considered to be armed and dangerous. “Do not approach him if seen,” LAPD said.

Police described Freeman as as being 5 feet, 11 inches tall, weighing about 150 pounds with tattoos on his chest, arms and neck. Police said the suspect is homeless and is known to frequent MacArthur Park and the Metro Redline system.


Anyone who spots Freeman is urged to immediately call 911. Those with information can contact LAPD Central Traffic Detective Campo at 213-833-3713 or 31480@lapd.online. 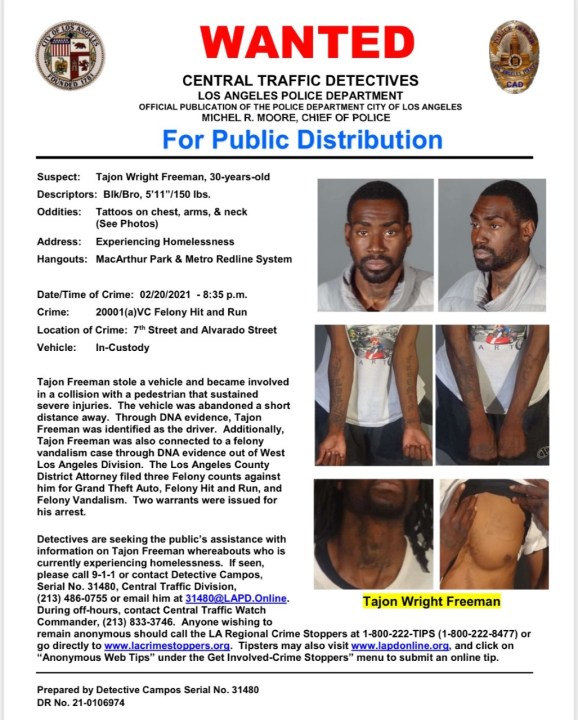