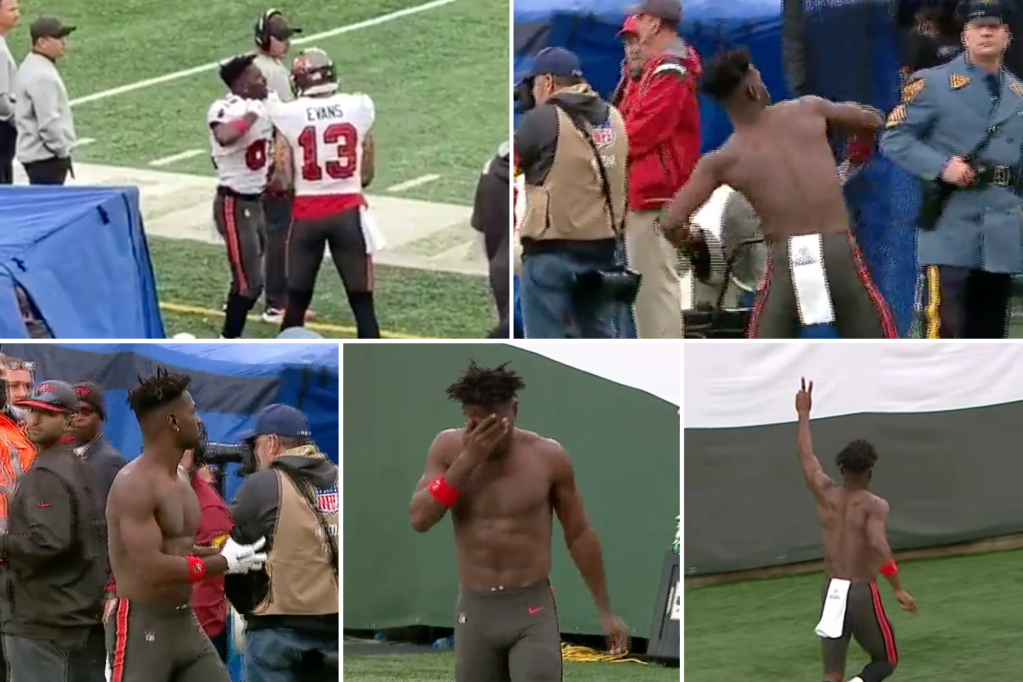 Antonio Brown’s outburst on Sunday not only cost him his career with the Buccaneers, but also a massive bonus. The star wide receiver lost up to $1 million in contract incentives now that his…

Antonio Brown took off jersey and gear, threw it into crowd, then ran to the locker room


Antonio Brown’s outburst on Sunday not only cost him his career with the Buccaneers, but also a massive bonus.
The star wide receiver lost up to $1 million in contract incentives now that his season is prematurely over.
During Tampa Bay’s win over the Jets, Brown refused to re-enter the game after head coach Bruce Arians asked him to twice. He took off his jersey, shoulder pads, shirt and gloves and threw them into the stands, then waved goodbye to the crowd. NFL Network reported on Monday morning that Brown had told coaches he was too hurt to re-enter the game, though Arians previously told Fox Sports that was not the case.
“He is no longer a Buc,” Arians said about Brown after Tampa Bay’s 28-24 comeback victory. 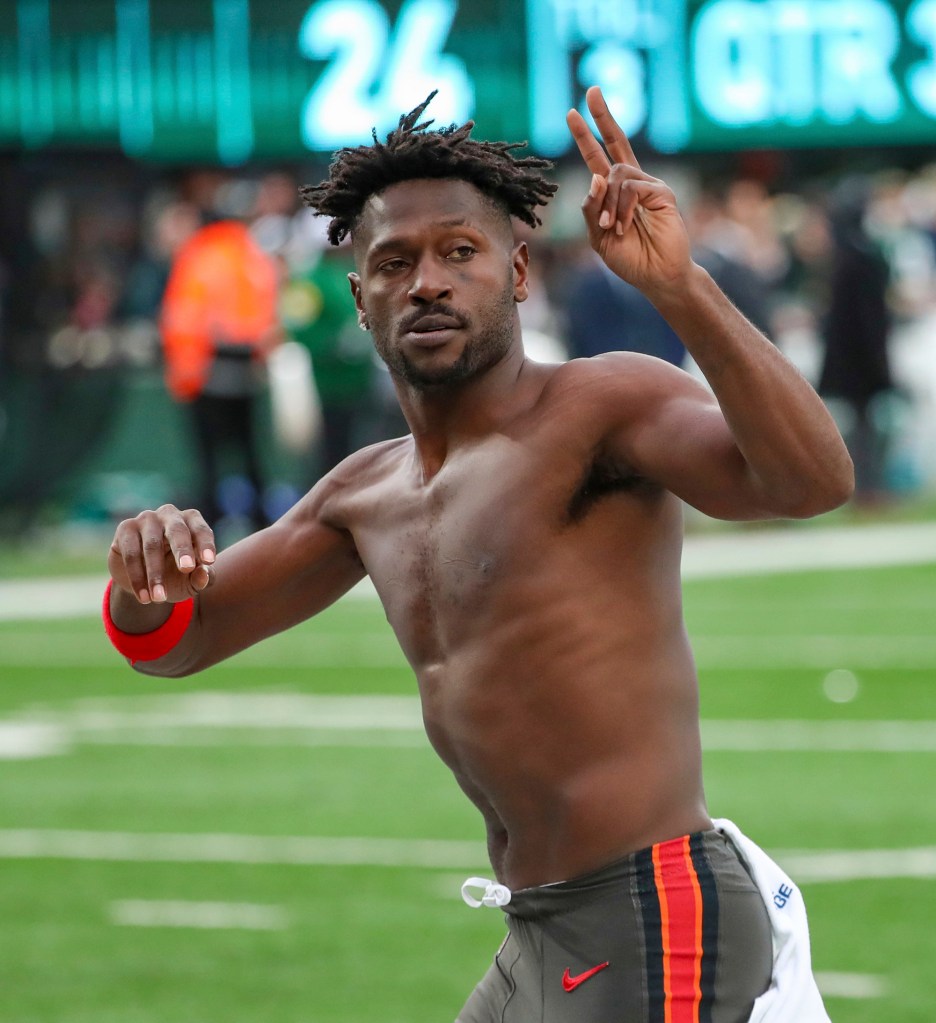 Antonio Brows runs off the field during the Buccaneers’ win over the Jets.AP
According to Spotrac, Brown had three separate bonuses he could receive, each totaling $333,000. He needed eight more receptions, 55 more receiving yards and one more touchdown for his big payday. Brown had another game and a half — the Buccaneers play the Panthers in Week 18 — to reach those marks. 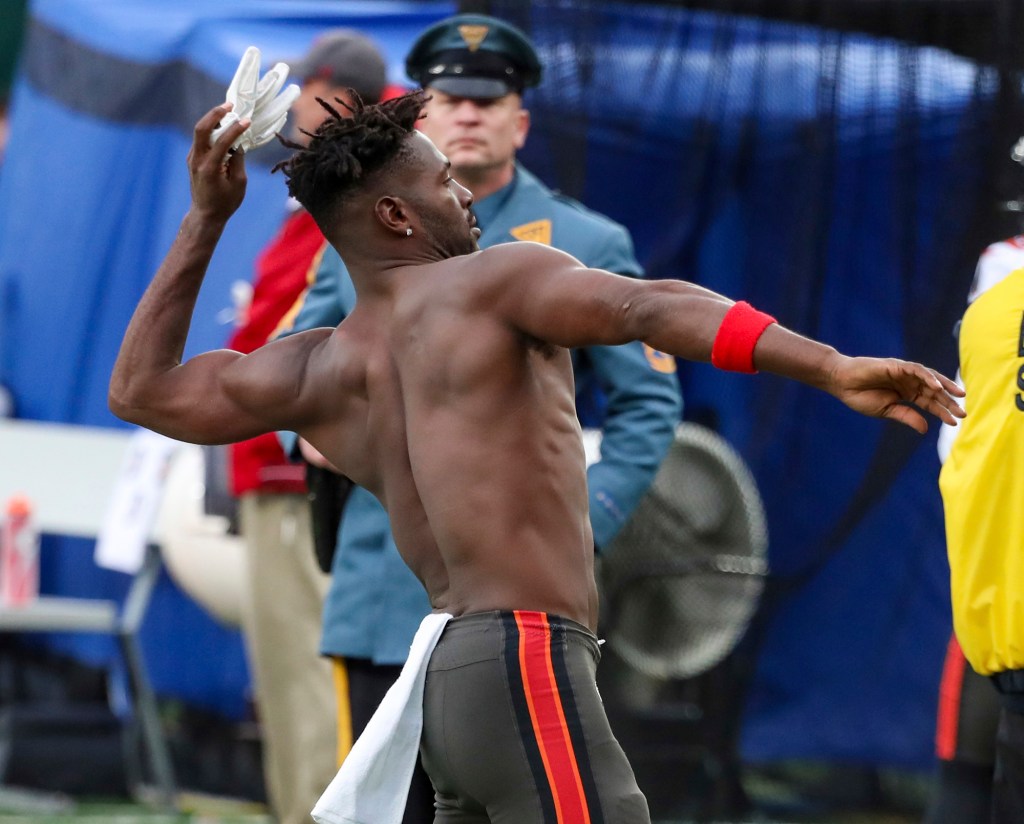 Antonio Brown throws his gloves into the MetLife Stadium crowd.AP
The 33-year-old signed a one-year, $3.1 million guaranteed contract with the Bucs in April.
The receiver only played six games this season after sitting out with numerous injuries and serving a three-game suspension for using a fake vaccine card.

Arians had defended Brown over the course of the season, but this is looking like it will be a clean split between Brown and the franchise. 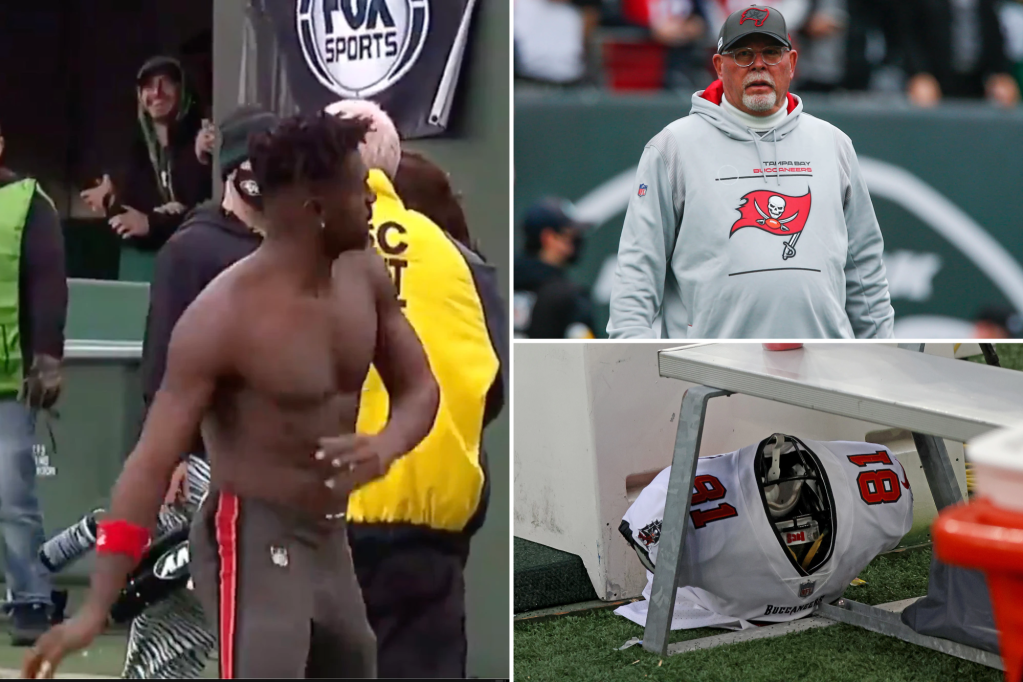 Antonio Brown’s meltdown seems to have been prompted by a request to go into the game.

Antonio Brown took off jersey and gear, threw it into crowd, then ran to the locker room


Antonio Brown’s meltdown seems to have been prompted by a request to go into the game.
Bucs coach Bruce Arians told Fox Sports’ Jay Glazer that he was trying to get Brown into the game, which the wide receiver refused. When he refused a second time, Arians reportedly told him to get out.
Brown did so, emphatically — creating a spectacle by removing his shirt, throwing it into the crowd and waving his arms before going up the tunnel. 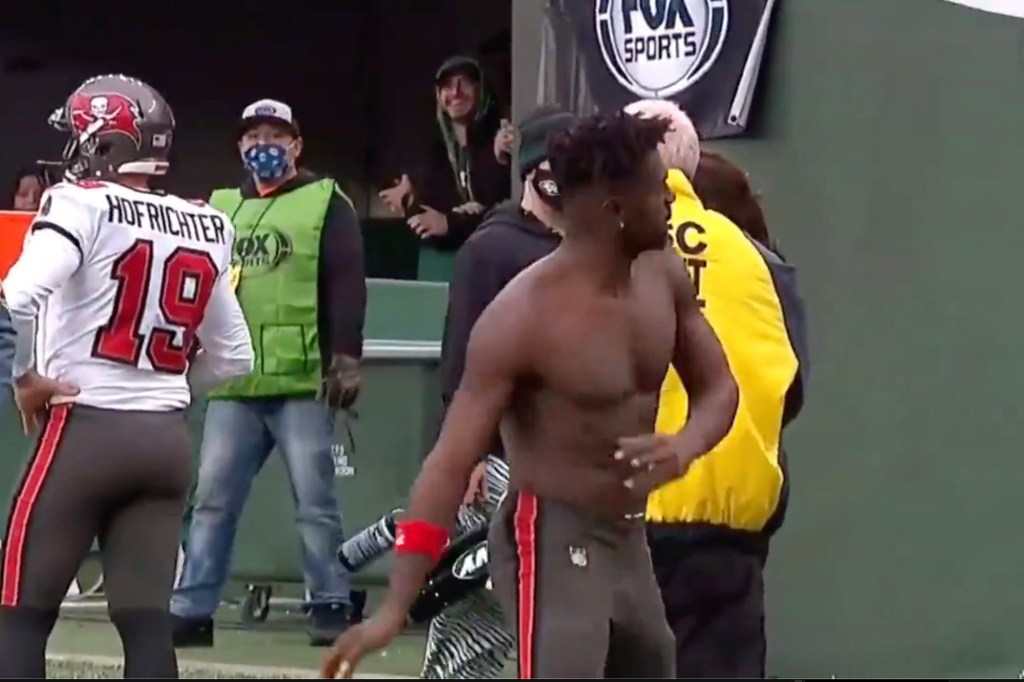 Antonio Brown leaves Sunday’s Buccaneers-Jets game shirtless.Fox
“Yeah, I did [see it],” Arians told Glazer. “Never seen anything like it in all my years.”
During his press conference after the Buccaneers’ 28-24 win over the Jets, the only comment Arians offered was to say Brown is no longer with the team. 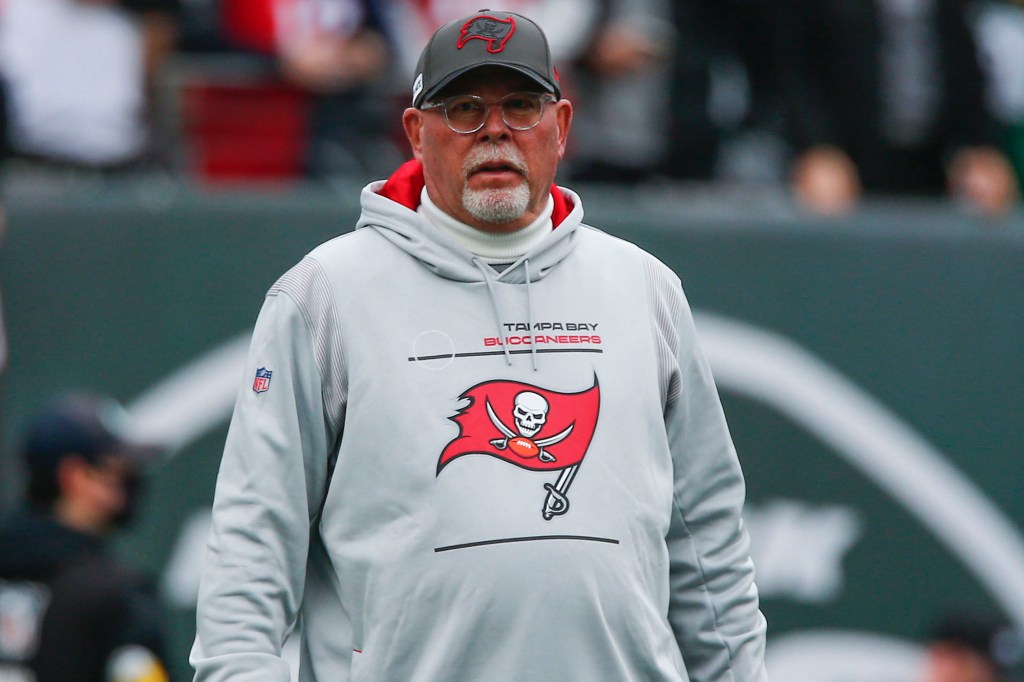 Bruce Arians before Sunday’s Buccaneers-Jets game.AP
Quarterback Tom Brady asked for compassion and empathy toward Brown, whom he considers a good friend. 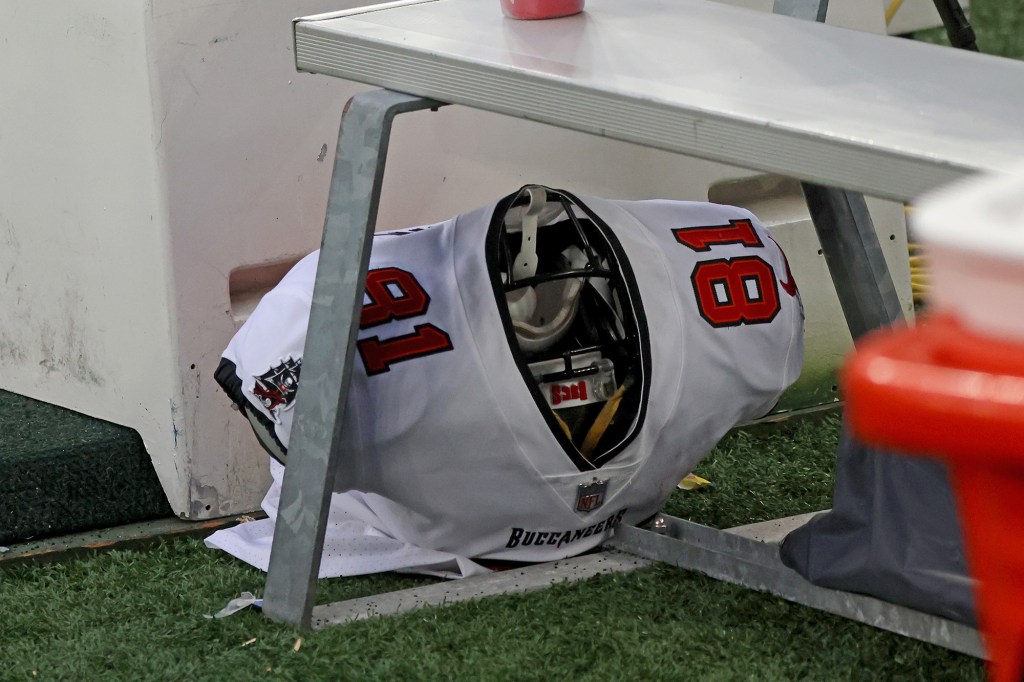 Antonio Brown’s pads on the Buccaneers sideline after he left Sunday’s game.Charles Wenzelberg/New York Post
He recorded three receptions before leaving in the third quarter. According to Fox Sports’ Jen Hale, Brown received a police escort to the airport, and had not communicated with the team about where he planned to go.
You must log in or register to reply here.
Share:
Facebook Twitter Reddit Pinterest Tumblr WhatsApp Email Share Link
Top