12,000 Haitian migrants in southern Mexico is but ‘tip of the iceberg,’ activist says

https://www.borderreport.com/hot-to...xico-is-but-tip-of-the-iceberg-activist-says/
12,000 Haitian migrants in southern Mexico is but ‘tip of the iceberg,’ activist says

Immigration
Haitians leaving South America by the thousands after jobs dry up; now they wait in Mexico for travel papers to resume trek to U.S. 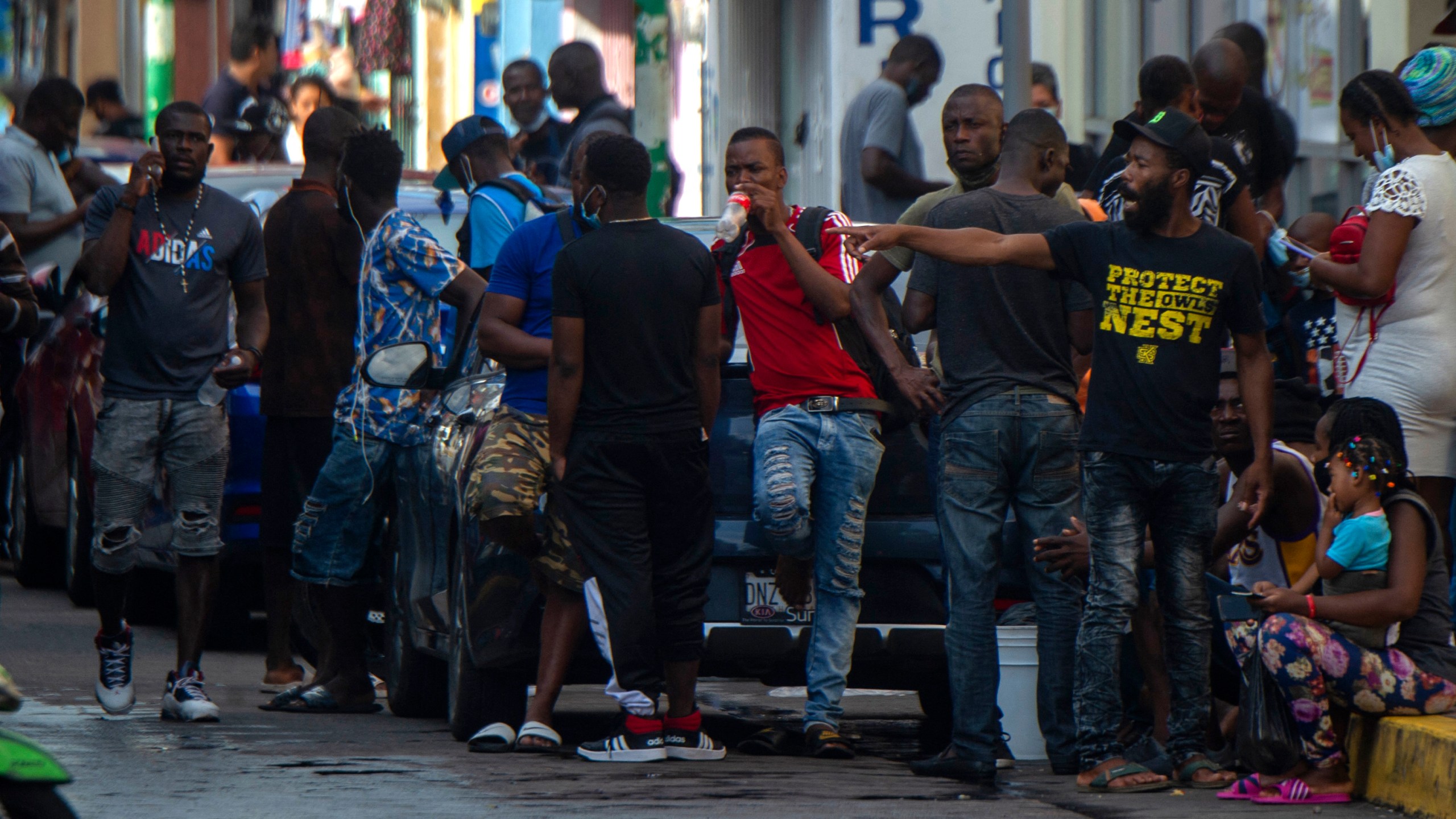 Haitian and Central American migrants remain in the streets of Tapachula, Chiapas state, Mexico, on September 15, 2021. – The new migratory flow of Haitians to the United States seems to be encouraged by friends and relatives who tell them about the benefits of living in the North. But no one warns them of the ordeal they will face first. In addition to thousands of kilometres of road, the journey to southern Mexico, from where they will try to flee to the promised land, includes days of walking through mountains and jungles infested with insects and animals, assaults by criminal groups and shipwrecks. (Photo by CLAUDIO CRUZ / AFP) (Photo by CLAUDIO CRUZ/AFP via Getty Images)

EL PASO, Texas (Border Report) – Dozens of Haitian migrants mill about the streets. Others gather in the town square, waiting for leads on when they’ll be able to leave the city.
The images on social media coming out of Tapachula, Mexico, reflect the anxiety of men, women and children who have nowhere to go in a town that doesn’t want them, says human rights activist Luis Garcia Villagran.
“We have 11,000 to 12,000 Haitians who are stuck in Tapachula, and I say stuck because they are not being given the opportunity to seek refuge in Mexico nor being allowed to proceed to the United States,” said Garcia, the director of the Center for Human Dignity, an advocacy nonprofit in southern Mexico.
This is the latest multitude of Haitians intent on reaching the U.S. border to seek asylum. In early September, Garcia saw his town empty, as nondescript buses came to take Haitians and Central Americans to Acuña, Mexico, from where some 15,000 crossed the Rio Grande at Del Rio, Texas.
Most were released into the United States but some were sent back to Mexico and find themselves back in places like Tapachula. 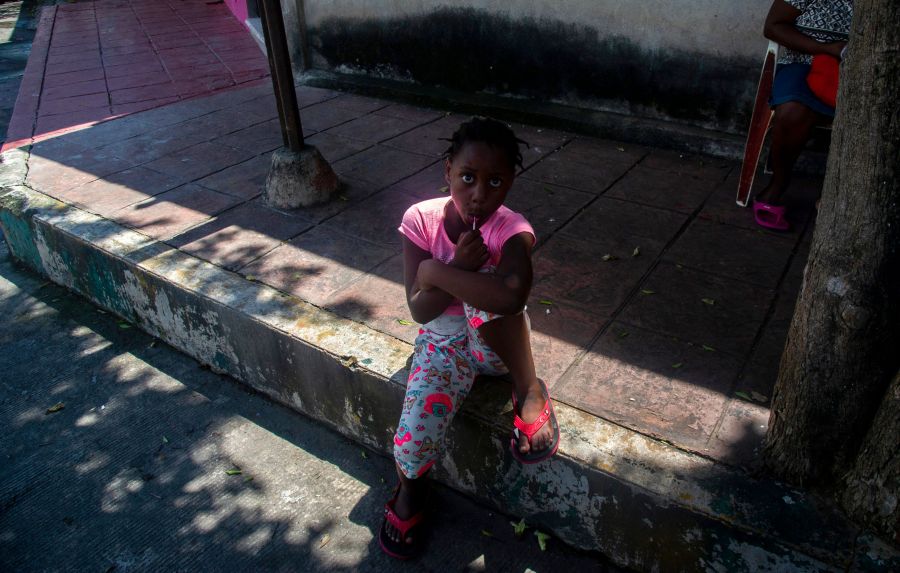 Haitian migrant Cristelle Camille Joseph sits on a sidewalk of Tapachula, Chiapas states, on September 16, 2021. (Photo by CLAUDIO CRUZ/AFP via Getty Images)
Now authorities in Panama are warning the U.S. government to expect the arrival of another 60,000 to 65,000 Haitians who passed through on the way north.
Panama official tells U.S. another 60,000 Haitians are on the way
Mexican activists and journalists say there are no caravans per se; the Haitians are trickling across the Suchiate River from Guatemala in groups of 10, 20 or 30 to more easily avoid detection by Mexican authorities. They’re coming not from their island in the Caribbean Sea but from South American countries that welcomed their cheap labor in the early 2010s and now turn their backs as COVID-19 ravages their economy.

They would have come sooner, but the tough, oft-insulting talk from the former president of the United States and his “exaggerated” militarization of the U.S.-Mexico border had kept back many, activists say.
“The perception is that the Biden administration will favor the entry of Haitians into the United States. They are trying to make their way to the U.S. at any cost. This is what we have seen in the last few months,” Garcia said.
He said up to 180,000 Haitians moved to South America in the 2010s. “This is the tip of the iceberg of an inevitable northern migration,” he said.


South America welcomed their labor, but now it doesn’t want them​

In a paper published last August, the Migration Policy Institute explained how many Haitians who survived a devastating earthquake in 2010 moved to South America. Brazil, which was about to host the 2014 World Cup and the 2016 Olympics and needed to upgrade its infrastructure, welcomed many of them. Neighboring Chile also took advantage of the cheap Haitian labor up until the pandemic hit.
It is mostly those Haitians from Brazil, Chile and other places in South America that are moving north now, plus those already in Mexico since the Central American surge of late 2018.
Garcia said he can tell where the Haitians are coming from by listening to their children. Those who were raised in Brazil speak Portuguese. Some speak Spanish; most speak Creole or French.
The activist isn’t concerned about why the migrants are in southern Mexico. He just wants to help them navigate an often-hostile environment in the gateway city of Tapachula.
Some images show them sleeping on sidewalks. Headlines in local newspapers bear frustration from local businesses concerned about potential health, crime, and sanitation issues.

“There is a hate culture against migrants, particularly Haitians. Merchants and so-called opinion leaders have incited hate against these migrants,” Garcia said. “The government is conducting raids and targeting Haitians. They take them to detention centers or march them like sheep to the border with Guatemala. Mexico supposedly has a leftist government now, but their migration policy is one of containment, detention and deportation.”

“… Mexico supposedly has a leftist government now, but their migration policy is one of containment, detention and deportation.”
Luis Garcia, director of the Center for Human Dignity
Click to expand...

Garcia and other activists in southern Mexico are helping the Haitians file legal writs to force the National Migration Institute to issue them humanitarian visas or travel permits. The goal is to help them get on their way and avoid a humanitarian crisis in Tapachula with the continuous arrival of more migrants.
“We provide support, information and sometimes advice to migrants who are coming here from all over the world. This has made us a target of our own government and of those who don’t like migrants, but we remain committed to our cause,” he said.
Texas Republicans remain up in arms at what they call President Biden’s open borders policy. U.S. Sen. Ted Cruz, R-Texas, said last week on the Senate floor that those policies are encouraging illegal migration, which not only subverts U.S. laws, but puts the migrants themselves at risk as well.
Visit the BorderReport.com homepage for the latest exclusive stories and breaking news about issues along the United States-Mexico border.
The September crisis in Del Rio, Texas, was “yet another consequence of President Biden’s and Vice President Harris’s dangerous refusal to enforce our laws, or to protect our borders, and refusal that is causing people to die, that is causing young girls to be trafficked, that is causing drugs to pour into our state, and that is causing our communities to become much less safe,” he said.
But Rosemary Rojas, board of directors’ president for the Farm Workers Center in El Paso, said Americans shouldn’t fear immigrants.
“I strongly believe that any people escaping climate devastation, political devastation and war have the right to seek shelter in another country,” she said. “Why should we welcome them? Because they are human. They have a right to live. A lot of the people migrating are women and children. What would a woman not do for her child? She would travel thousands of miles to make sure her family is safe.”